Indian captain Virat Kohli felt Hardik Pandya's performance in his debut Test series was the biggest gain for the team from the three-match series against Sri Lanka. India whitewashed the hosts 3-0 on Monday.

"The regulars have performed, but the biggest positive would be Hardik's inclusion and the way he shaped up in these three Test matches," Kohli was quoted as saying at the post-match presentation in a PTI report. 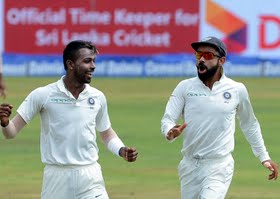 "The kind of confidence he showed with the ball and the maturity with the bat, it really gives us a lot of boost and the balance," added Kohli.

Pandya smashed his maiden Test hundred in India’s first innings at Pallekele. He had earlier scored a fifty, and even claimed a few wickets in the series.

"We like to be prepared before hand and be proactive rather than being reactive. We have age on our side and we have an opportunity to play together for five, six years for the country,” he further said in the PTI report.

Despite the margin of defeat, Kohli gave credit to the Lankans. "All of them are super talented players, that is why they are playing for the country. They beat Australia 3-0. Sometimes the side has momentum, sometimes they don't. It's all about keeping the belief going and not losing motivation because of a few results. That is what we believe in as a team as well,” he further said.