The next time New Zealand play a Super Over, they might as well give up before the ‘extra time’ gets underway. For the fourth time, starting with World Cup final last year,

The next time New Zealand play a Super Over, they might as well give up before the ‘extra time’ gets underway. For the fourth time, starting with World Cup final last year, the Kiwis went down in the Super Over. Friday marked the second time in as many games that New Zealand came second in the Super Over after being well placed to win in real-time.

In an eerily similar script to one that played out at Hamilton, New Zealand went into the last over needing seven from six balls. However, Shardul Thakur had Ross Taylor (24) and Daryl Mitchell (4) caught while Tim Seifert (57) and Mitchell Santner (2) were run out as the match headed into the dreaded Super Over for New Zealand.

Tim Seifert and Colin Munro hit a four each off Jasprit Bumrah in the Super Over, but could only score 13. In reply, KL Rahul smashed stand-in captain Tim Southee for a six and a four before getting out. The calm Indian skipper Virat Kohli then hit the winning runs with a boundary to deep midwicket as India sank Kiwi hearts yet again to go 4-0 up. This was the Black Caps’ seventh Super Over loss in eight attempts. 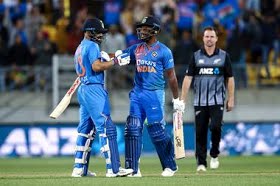 Earlier, chasing India’s 165 for 8, New Zealand were in total command at one point racing to 96 for 1 in the 12th over when opener Colin Munro perished for a well made 64 from 47 balls. With no Kane Williamson, Seifert came in at number three and grabbed the opportunity with an impressive half-century. India somehow stayed in the game till the last over where Taylor and Seifert stumbled and failed to carry New Zealand over the line.

While the Kiwis were missing their skipper Williamson, India rested Rohit Sharma, Ravindra Jadeja, and Mohammed Shami. Sansu Samson opened the innings in Rohit’s absence but hit one straight up in the air off Scott Kuggeleijn to perish for eight. Mitchell Santner, who had caught Samson, also held on to Kohli’s (11) catch as the Indian captain was surprised by Hamish Bennett's bounce, and hit one straight up in the air.

Ish Sodhi (3-26) got Rahul (39), Shreyas Iyer (1) and Shivam Dube (12) to put India on the backfoot. However, Manish Pandey’s composed unbeaten 50 from 36 lifted India to a competitive 165, which was enough in the end as New Zealand were left to rue another ‘super’ opportunity slip away.