Ben Stokes bowled a brilliant last over as he defended 15 runs needed for Sri Lanka to win to put his team in the semi-finals, joining West Indies from Group 1. In what was an over full of unplayable yorkers

Ben Stokes bowled a brilliant last over as he defended 15 runs needed for Sri Lanka to win to put his team in the semi-finals, joining West Indies from Group 1. In what was an over full of unplayable yorkers, even the well-set Mathews, who remained unbeaten on 73 from 54 balls, could not find the boundaries, as England won by 10 runs and secured their place in the semis. At one stage, the match seemed firmly in England's grasp, after Jos Buttler's blazing 66 from 37 took them to 171. The bowlers then reduced Sri Lanka to 15 for 4, but Mathews, with support from Chamara Kapugedera and Thisara Perera kept England on their toes.

While Stokes bowled an incredible last over, England must be indebted to Chris Jordan for the victory. When Mathews and Dasun Shanaka managed to put together a sequence of a few big hits, England seemed to be losing it. He first had the dangerous Thisara Perera caught at mid-off for 20 from 11. That gave England some breathing space, but Shanaka proceeded to hit David Willey for a huge six and a four as things got tight. It was Jordan, who again delivered the big blow, getting Shanaka, although it must be said that it needed a fantastic two-handed diving effort at mid-off to complete the wicket. Jordan then got Rangana Herath with a yorker, and Stokes was good enough to finish off Lanka.

Buttler was as much responsible for England's triumph as Jordan and Stokes. It was he who set up the match for England. At one stage it seemed they England would be restricted to a score of around 150, but Buttler gave them those extra 20 runs, which made a huge difference in the end. He was extremely severe on Dushmantha Chameera, smashing him for three fours in the 17th over to give the innings much needed momentum. In the penultimate over bowled by the same bowler, he cut one for four, and swung another over long for a six, as 15 came off that over. Like with the ball, Stokes had the final say in England's batting as well, blasting the last ball by Perera over midwicket for six.

England's start wasn't as bright. Alex Hales was trapped in front for a duck, trying to sweep Herath. Jason Roy and Joe Root then held the innings together, hitting the boundaries when not picking up the singles and twos. Run scoring wasn't easy, but England managed to keep themselves in a decent position. Root fell for 25, hitting a short ball from Jeffrey Vandersay straight to deep midwicket. The bowler soon claimed Roy as well, as the batsman swung and missed, and was given lbw for 42. Buttler found good support in Eoin Morgan, who had contributed 22 from 16 when he was run out in the last over. But, it was Buttler, who was getting the big hits. 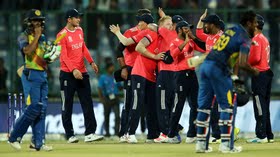 If England's start was bad, Sri Lanka's was disastrous to say the least. The third ball of the innings by Willey was pulled by Tillakaratne Dilshan straight to deep square leg. Dinesh Chandimal then edged a wide delivery from Jordan behind the wickets. Milinda Siriwardana hit a six from off Willey over long on, but fell in the covers going for a lofted stroke. Disaster struck as Lahiru Thirimanne was run out following a mix-up with Mathews, as Stokes hit down the stumps at the non-striker's end. Mathews and Kapugedara began the fightback for Sri Lanka. They were extremely severe on Adil Rashid taking him for 21 in the 12th over. After Kapugedara fell for 30, going for a big shot, Mathews continued the fight. But, Stokes again tasted glory in the final act.