Man of the match: Amit Mishra

Kumar Sangakkara: "I think we spoke about in the dressing room about competing hard and scrapping through worked out in the middle, I am proud of the boys. We did well in the second half, but we were a few runs short while batting first. We can probably play a lot better than this and we need to keep our feet on the ground. It means a lot for this a new team and thanks to the fans. "

Angelo Mathews: "We started off brilliantly and the bowlers bowled well to keep them to less than 130. We were a bit slow to start the chase, lessons are learnt and we need to move on. We have got 15 more games and I have the confidence in my team."

Amit Mishra is the Man of the Match for his 3 for 19:"I am very happy with the way I bowled, I went for wickets and got success. There was a little bit of turn in the pitch and so I went for the wickets. We were short of some runs and we had no other option but to go for wickets."

Yuvraj Singh will be playing in the IPL after nearly two years .

Kumar Sangakkara, the Sunrisers Hyderabad captain, said that while the team would be affected by the absence of Shikhar Dhawan, his injury would offer a younger player a chance to perform. Dhawan fractured his finger while fielding in the third Test against Australia in March.

Warriors did not have a single bowler in the top-20 wicket-takers last season. Ashish Nehra, now with Delhi Daredevils, took 11 wickets for them and was in 26th place. Their leading run-scorer, Robin Uthappa, was 12th with 405 runs. 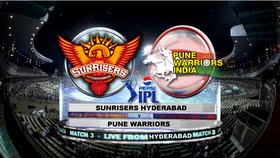