Didn't know if I was ever going to play cricket again: Smith after stupendous 144

Former Australia skipper Steve Smith scripted a fairy-tale comeback to Test cricket with a stupendous 144 on the opening day of the 1st Ashes Test at Birmingham.

Former Australia skipper Steve Smith scripted a fairy-tale comeback to Test cricket with a stupendous 144 on the opening day of the 1st Ashes Test at Birmingham. Smith's knock enabled the Aussies to recover from a precarious 122 for 8 to post 284.

However, post the brilliant knock, Smith admitted that there were times in the past 12 months, during the ban, when he felt like completely walking away from the game. The Australian great revealed that following the elbow injury in January and the rehab for it, he felt like giving up the sport he loved for the first time in his career.

"There were times throughout the last 15 months where I didn't know if I was ever going to play cricket again. I lost a bit of love for it at one point, particularly when I had my elbow operation, and it was really bizarre, it was the day when I got my brace off my elbow I found my love for it again. I don't know what it was, it was like a trigger to go again, I want to play, I want to go out and play for Australia and I guess to make people proud and just do what I love doing," Smith was quoted as saying in an ESPNCricinfo report. 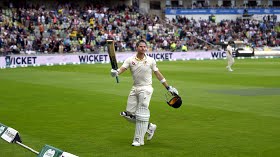 Reflecting on the great innings, Smith was at loss for words. He gave credit to England bowlers for some superb bowling in the first two sessions on what was a tricky surface to bat on.

"I didn't really know what to do, to be honest, it's been a long time coming, but I'm just, I don't know, I'm sort of lost for words at the moment. Just really proud that I was able to help pull the team out of a little bit of trouble. Obviously, England bowled exceptionally well in the first two sessions and it was hard work out there, I'm just proud that I was able to dig in and fight through the difficult periods and get ourselves to a competitive total.

"I think it has got to be one of my best hundreds, definitely, first Ashes Test match, the ball was doing a fair bit out in the morning so I had to work really hard. I got beaten a few times but I just had to let that go and concentrated on the next ball and kept digging in, I know that the first Test for an Ashes series is always big. I didn't want to give my wicket up easily, I wanted to keep fighting and fortunately I was able to dig in today and get ourselves to a reasonable total I think," Smith said of his knock.

Smith's incredible comeback would have been impossible without support from the lower order. The former captain added 88 with Peter Siddle and 74 with Nathan Lyon as Australia made a dramatic comeback in the match.

"I thought Peter Siddle did a magnificent job, that partnership we were able to form and Nathan Lyon as well, he was magnificent. He actually said to me that's the most nervous I've ever been out in the middle batting so to be able to get to my hundred and give him a really big hug and let all my emotions out that was really special," Smith went on to say.

Smith was also asked about the constant booing from the crowds but said it did not bother him. "It doesn't bother me to be perfectly honest, I know I've got the support of the guys in the room and for me, that's all that really matters," he said.