Don’t know how we’re going to get Virat Kohli out: Moeen Ali

England all-rounder Moeen Ali has admitted that getting Indian captain Virat Kohli out will be among the major challenges for them in the Test series against India that will get underway soon. Kohli is returning from his paternity leave, having missed three of the four Tests Down Under. According to Moeen, Kohli will be extra-motivated to do well having missed out on a slice of history in Australia.

Speaking about the Kohli threat ahead of the first Test against India on February 5, Moeen conceded, “How do we get him out? He’s obviously an amazing player, world-class, he’s very motivated to do well and I’m sure he’ll be even more motivated after they did well in Australia and he had to leave for the birth of his child.”

“I don’t know how we’re going to get him out because I don’t think he has any sort of weakness but we have a good bowling attack, some pace in the line-up. 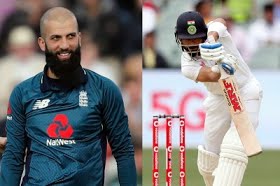 “He’s a great guy and a good friend of mine — we don’t talk too much about cricket. We do a little bit but not too much.”

Moeen has not played a Test match since the 2019 Ashes, and is no longer an automatic pick in the starting XI. However, he stated that he is ready and motivated to do well if he gets a chance.

“Whether or not I get picked is another matter… in terms of being ready to play, I think I’ll be fine to play, I’ll be ready. I’ve waited long enough,” he said.

“I still feel I’ve got wickets and runs in me and match-winning performances within me. I have little targets I want to achieve first. I am not too far away from getting 200 wickets.

“I know people say they don’t look at these things but it would be something I would look at. Then I would set another target after that,” he added.

The 33-year-old suffered a setback after he tested positive upon arrival in Sri Lanka. Giving an update of his health, the all-rounder added, “I’m all right now. Once I tested positive, I just wanted to get it over and done with really. It has been tough but I’m a big believer in ‘after hardship comes ease’. Hopefully there is ease after this.”

Moeen has 181 wickets and 2782 runs in Tests. He will be keen to add to the tally in India, an opponent against whom he has enjoyed a lot of success in the past.