Kolkata Test Review: India did not learn any lessons from Mumbai

If the defeat in Mumbai was embarrassing, India’ performance in Kolkata was equally poor. The loss was a clear indication of the fact that India did not learn any lessons from the loss at Wankhede Stadium.

If the defeat in Mumbai was embarrassing, India’ performance in Kolkata was equally poor. The loss was a clear indication of the fact that India did not learn any lessons from the loss at Wankhede Stadium. If they were poor on the rank turner demanded by skipper M S Dhoni in Mumbai, they were equally bad at Eden Gardens even though they got the best conditions to bat on, on a flat first day pitch. The defeat signified without an iota of doubt thatthe Indians hadn’t learnt their lessons from the Wankhede debacle, or, may be, they are not interested at all.

Right from the opening day, the Indians were on the back foot , after winning the toss and deciding to bat first. Ideally, they should have put up a score of 600 on a pitch that was hardly doing anything on the first day of the Test. Instead, they batted as if this was another rank turner, which it definitely wasn’t. The fact that they gifted away Virender Sehwag’s wicket very early on indicated that their minds weren’t in the right place. How else can you explain an opening batsman getting run out on the opening day of a crucial Test? 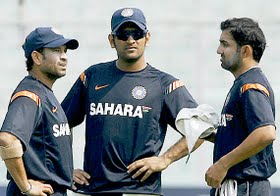 Some of the other batsmen got starts, but none of them looked set in spite of spending a decent amount of time on the crease. Gautam Gambhir, who was equally at fault in the Sehwag run out, made a half-century, but while his task was to carry on to get that highly elusive hundred, he threw his wicket away instead. The others did not fare any better. Cheteshwar Pujara could be forgiven for having one poor game, but what about Yuvraj’s failure again? He played a bad shot to get out, and that too after getting his eye in.

Sachin Tendulkar, whom India have persisted with despite consistent failures, did manage to notch up a half-century in the first innings, but it wasn’t a convincing innings by any stretch of the imagination. By no means was he back to form. Like Gambhir, even he failed to carry on to register a bigger score, and was back to his low-scoring ways in the second innings. Also, pointing fingers at Virat Kohli would be harsh for he single handedly held India’s batting together in the last year. Even so his shot selection, which has been consistently poor, must be questioned.

There was no improvement in India’s batting in the second innings, if anything it was only poorer. As if to reiterate that they aren’t bothered by the game results, Gambhir ran out another batsman, this time it was the in-form Pujara. Gambhir himself fell after getting a start, as did Sehwag, both to poor stars. The rest continued the wicket-falling procession, as if they were present just to make up the numbers. Ravichandran Ashwin batted exceptionally well, but it only proved how badly the more celebrated batsmen played.

In spite of all this, some of the Indian players were spotted giggling out in the middle when the Englishmen batsmen were making merry with the bat. That gave away everything.