Australia has named the same squad that they had picked a month ago for the upcoming ICC World Twenty20 2012. The squad that the Selectors had named was for the T20I Series against Pakistan to be played in UAE.

Australia has named the same squad that they had picked a month ago for the upcoming ICC World Twenty20 2012. The squad that the Selectors had named was for the T20I Series against Pakistan to be played in UAE.

So the selectors have stuck with 41-year-old chinaman bowler Brad Hogg for the fast paced Twenty20 cricket. Hogg has had a strange career as he had retired from International Cricket four years ago and took up Commentary. However, he decided to play in the Big Bash League where he found that his magic with the ball was world class as he kept on bamboozling various batsmen with a mixture of chinaman, googlies and flippers. Hogg reversed his decision on retirement in International Cricket to force his way back in the Australian T20 Squad. Hogg is expected to play a key role on the slow spinning surfaces in Sri Lanka during the Twenty20 World Cup. 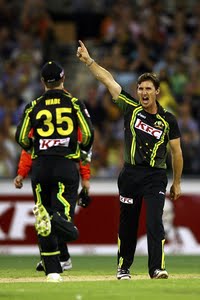 Commenting on the squad, National Selector John Inverarity has been quoted in the Cricket Australia website as: “The ICC World Twenty20 15-man squad is the same as the T20 squad scheduled to play against Pakistan in the UAE in early September. A real strength of the squad is its flexibility and versatility. It’s a well-balanced side that will provide the captain, George Bailey, with plenty of options in both the batting line-up and bowling possibilities.

The seam bowling has depth with Clint McKay, Pat Cummins, Ben Hilfenhaus and Mitch Starc along with all-rounders Shane Watson and Dan Christian, and to a lesser extent Michael Hussey, who could be useful for an occasional over or two."

“Similarly there is depth in the spin bowling department with Brad Hogg, Xavier Doherty and also all-rounders Glenn Maxwell and David Hussey. You can then add to that the possibility of the wrist spin of Cameron White and David Warner.

“There is a great deal of explosive strike power in the batting line-up that could see Matthew Wade at six, Cameron White at seven and either Dan Christian or Glenn Maxwell at eight. There is also a good blend of left and right handers with David Warner, Michael Hussey and Wade likely to be in the top seven."

The ICC World Twenty20 promises to be a very exciting event as T20 cricket is so unpredictable. Our squad will be well prepared and we look forward to them playing some outstanding cricket and acquitting themselves especially well."