Desperate to break their three-match losing streak, South Africa face an unpredictable West Indies in match number 15 of the ICC World Cup 2019 at the Hampshire Bowl in Southampton on Monday.

While South Africa has tasted defeat against hosts England, Bangladesh and India, West Indies rolled over Pakistan before falling to Australia at the final hurdle in their second game. The Proteas would undoubtedly want to snap their poor run, while West Indies will be raring to prove that they are real contenders for the throne.

South Africa is still reeling from the news of Dale Steyn being ruled out of the World Cup while Lungi Ngidi's participation remains doubtful. In between, there have been the distraction that AB de Villiers had offered to be part of the World Cup at the last minute. In view of South Africa's travails, this news has been given a lot of prominences. 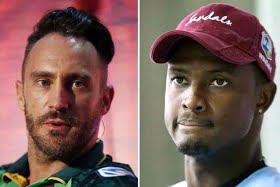 Kagiso Rabada has bowled his heart out in the matches so far but has found little support. With Ngidi in doubt for the game, Steyn's replacement for the World Cup, Beuran Hendricks is likely to get a chance to prove his worth. More will also be expected of Imran Tahir, who was not at his best against India. More significantly, the Proteas will need their experienced batsmen to start firing.

West Indies, on the other hand, would rue the missed chances against Australia. Having them on the mat at 79 for 5, they should never have allowed the Aussies to get close to 290. However, their mixed performance was an indication that the Windies are still not a finished product and that they still have some holes to fill.

Jason Holder has been brilliant for West Indies with both bat and ball and has been clearly leading from the front. Oshane Thomas is another fast bowler who is quickly rising up the ranks. Their batsmen could have chased down the target against Australia, but couldn't keep their wits against a disciplined Aussie attack. They do have the men who can trouble South Africa though in the likes of Andre Russell and Shai Hope among others.