Although New Zealand faltered in all departments of their game in the Tests against South Africa, it was their trepid batting that let them down in a big way. Scores of 47, 275, 121 and 211 won’t win you matches unless you have an extraordinary bowling line up, which the Kiwis do not possess.

Although New Zealand faltered in all departments of their game in the Tests against South Africa, it was their trepid batting that let them down in a big way. Scores of 47, 275, 121 and 211 won’t win you matches unless you have an extraordinary bowling line up, which the Kiwis do not possess. While it is a given that the New Zealand batsmen are nowhere near talented to deal with an extremely incisive Proteas bowling attack, it is equally disappointing that some of their batsmen, who have now gained a fair degree of experience, continue to falter. Here’s a look at some of the batters that Kiwis have placed their faith in over the last couple of years and their performance. 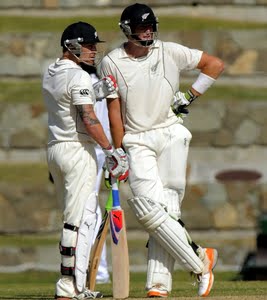 Martin Guptill: The opener who debuted in 2009 has so far featured in 30 Tests, but has managed only 1714 runs so far. He has scored a mere two centuries in this period–those too have come against the minnows, Bangladesh and Zimbabwe. Guptill averages 17.75 against Australia, 24.84 against India, 27.88 against Pakistan, 17.20 againt South Africa and 18 against Sri Lanka, figures which are pretty much unacceptable.

Brendon McCullum: The most experienced of the lot and the present skipper, McCullum has played 72 Tests so far but his figures don’t match up to his talent. He has so far gathered 4180 runs at an average of 35.12 with only six hundreds and a highest of 225. Three of his six tons have come against the weaker sides. He does possess a good record versus India averaging nearly 50, but against Australia his average falls to 25.85, against South Africa he averages 26.13 and against Sri Lanka 25.78.

Ross Taylor: The former captain, who decided to skip the South Africa series under controversial circumstances has impressive overall figure but hasn’t achieved the consistency needed to be feared at the top level. In 43 Tests, he has scored 3268 runs with eight tons and a highest of 154 not out with an average of 43.57. He has good averages against England, Sri Lanka, Pakistan and India – 50, 50, 49 and 43 respectively. However, that has more to do with him performing handsomely in select games. Also, he averages 36 against Australia, 30 against South Africa and 27 against West Indies.

Kane Williamson: A highly talented name in New Zealand circles, Williamson has so far featured in 20 Tests, scoring 1090 runs at an average of 30.27 with three hundreds. The good part is that he has got all his tons against the big nations –India, South Africa and Sri Lanka. He still has some way to go before he can achieve consistency needed to be rated as a highly skilled player. Williamson averages 40 against Sri Lanka, 36 against India and 34 versus South Africa. He needs to improve his record against these countries and even more against some of the rest. He averages 12 in Australia and West Indies and 21 in Pakistan.