South Africa defeated India by six wickets in the second T20 international at Barabati Stadium in Cuttack and have already won the series with one more game still to come. Put into bat, India were bowled out for just 92 runs and South Africa chased it comfortably despite some crowd trouble.

With dew factor in mind, South African skipper Faf du Plessis won the toss and elected to bowl first. As far as team combination concern, India had made only one change with Harbhajan Singh replacing Sreenath Arvind and for the visitors, Albie Morkel replaced Marchant de Lange. After a loss in the first T20, hosts were expecting a solid start from their 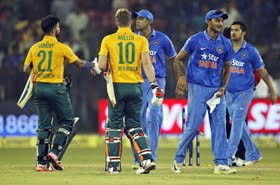 openers but that didn’t happen this time again. Shikhar Dhawan was not able to judge the pace of the delivery and played the shot to early to be adjudged leg before wicket for just 11 off Chris Morris. Soon after that, Virat Kohli and Rohit Sharma both perished run out. Kagiso Rabada got a wicket in his final over, with a low full toss on leg stump that Ambati Rayudu swung at and missed, getting bowled in the process. After this, lower middle order was not able to give any resistance to the batting and every one fell cheaply without making any significant contribution.

Chasing a below par score of just 93 runs, visitors would have assumed this to be an easy chase but they also lost four wickets. Hashim Amla was caught by Rohit Sharma off Ashwin in the second over for just 2. Ashwin struck twice more, when Faf du Plessis was caught by caught by Mohit Sharma for 16 and he bowled de Villiers for 19. The score that time was 49 for 3 in 8 overs. By this time, Ashwin had bowled his full quota of four over and then no any bowler was able to put any kind of pressure on the visitors what so ever. JP Duminy again shown his class and proved his utility in limited format. He scored 30 runs unbeaten and took his side home.

Ashwin took three wickets but still it was not enough for India to restrict South Africa. Axar Patel also got one wicket.

Man of the Match: JA Morkel