What Angelo Mathews said about his decision to resign as captain

Angelo Mathews stepped down as captain of Sri Lanka from all three formats after Sri Lanka's defeat to Zimbabwe.

Angelo Mathews stepped down as captain of Sri Lanka from all three formats after Sri Lanka's defeat to Zimbabwe.

In an exclusive interview to Cricbuzz, Mathews admitted, "I am leaving with a heavy heart. But no regrets. I have had an outstanding four years as captain. I have been accused of various things by people, but I am telling you that I have always been honest and given 100 percent. I believe in karma.” 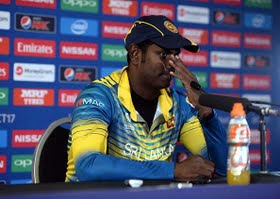 "I had got great support no doubt. But I think the time is right to go. Let some fresh thinking come in. I wanted to step down a year ago as well. But at that point there was no one to take over. Now I feel that there are candidates who can take over the captaincy,” Mathews further told Cricbuzz.

"After the loss I had a deep think about it. No doubt it was a bitter pill to swallow as we didn't expect it. I was very very disappointed because I set myself and the team high standards. My personal opinion was that we needed a change. I felt that I needed to leave enough time for my successor to gel with the team on his way to the 2019 World Cup,” the website further quoted the former Sri Lankan captain as saying.