CSK Vs KKR: Michael Hussey was too good for Kolkata

In T20, one brilliant knock is often enough for a team to clinch victory. And, for the umpteenth time, Michael Hussey came up with a thrilling innings, to play the lead role in Chennai Super Kings’ impressive victory over struggling defending champions Kolkata Knight Riders (KKR) at Chepauk.

In T20, one brilliant knock is often enough for a team to clinch victory. And, for the umpteenth time, Michael Hussey came up with a thrilling innings, to play the lead role in Chennai Super Kings’ impressive victory over struggling defending champions Kolkata Knight Riders (KKR) at Chepauk. Hussey played the typical knock that we have come to associate with him over the years. The effective left-hander ran superbly between the wickets in spite of the heat at Chennai andnever missed an opportunity to hit the big shots. KKR bowlers, Sunil Narine included, had no answer to Hussey’s magnificenceon the day, and that was pretty much the story of the match.

Hussey’s partnership with his new opening partner Wriddhiman Saha set up the win very well nicely for CSK. Considering Murali Vijay’s consistent failures in this season so far, the Chennai think tank took the sensible decision of bringing in Saha for Vijay. To his credit, the new opener also supported Hussey to the hilt. Saha looked in no trouble at all, as he matched Hussey stroke to stroke during the opening stand. At the other end, Hussey continued to bat without a trouble in the world. 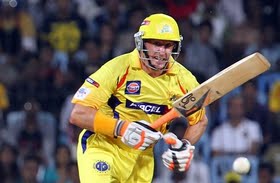 If the partnership between Hussey and Saha put Chennai on the path to a massive score, Hussey ensured that the run rate never dipped even after Saha fell. There was never a period when he slowed down. The most impressive aspect of Hussey’s knock was that he did not let any bowler settle down. He was severe on everyone from Sunil Narine to Laxmipathy Balaji and the experienced Jacques Kallis as well. Hussey was unlucky to miss out ona well-deserved hundred, but the Aussie would have beenpleased with his effort nonetheless.

Kolkata had an opportunity to restrict Chennai once Hussey was finally dismissed, but Suresh Raina called in all his T20 experience and saw to it that there was no dip in the team’s run-rate. MS Dhoni did not have much to do this time round, but played a nice cameo to help Chennai end their innings on a high. It was a highly disappointing effort Kolkata with the ball. Not one bowler was successful in restricting the onslaught by the Chennai batsmen. The hosts’ batsmen also proved that Narine is also vulnerable if attacked, something which other sides have rarely tried.

Chasing such a massive target, the only way Kolkata were going to be inthe hunt were if they got off to a rollicking start. Manvinder Bisla and Gautam Gambhir gave them hope early on, and some rubbish bowling by Dirk Nannes aided their cause. However, once Gambhir departed, the pressure of the big total got to them. Brendon McCullum and Kallis’ failure made matters worse for them. Kudos to Bisla for continuity the fight till the very end, playing a blistering knock, but it was only fair that Hussey had the final say, running out Bisla. In the end, KKR had too big a mountain to climb.

Turning point of the game:The opening partnership between Hussey and Saha, which added over 100 in 10 overs.