Bangladesh's bowlers successfully defended 154 as they got their World T20 campaign off to a winning start, against Netherlands at Dharamsala on Wednesday

Bangladesh's bowlers successfully defended 154 as they got their World T20 campaign off to a winning start, against Netherlands at Dharamsala on Wednesday. After Tamim Iqbal’s high-class unbeaten 83 took Bangladesh to a respectable score, even as most others struggled, Taskin Ahmed gave away on eight runs in the last over, when the Dutch needed 17. Mudassar Bukhari and Pieter Seelaar combined to take 16 runs from the penultimate over bowled by Al-Amin Hossain, which gave Netherlands an outside chance to push for a victory. But, Bukhari was run out in the last over, and there were no boundaries as Bangladesh got home by eight runs.

In the end, Iqbal’s knock shone through brightly on a surface where most batsmen from both sides struggled. His 83 from 58 balls was studded with six fours and three sixes. The next highest score in the Bangladesh innings was 15 scored jointly by Sabbir Rahman and Soumya Sarkar, which speaks volumes of how well Iqbal batted. Even for Netherlands, the highest score in the innings was by 30 by skipper Peter Borren. Skipper Mashrafe Mortaza also played a massive role in Bangladesh’s triumph, conceding only one four in his spell, to finish with superb figures of 1 for 14. 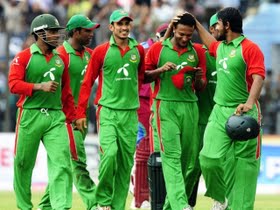 Having won the toss, and deciding to bowl, Netherlands got off to the worst start possible. A thick edge by Sarkar was dropped at third man in the first over by Mudassar Bukhari, as the ball met the ropes. Sarkar’s luck did not last long though as he edged a short ball from Paul van Meekeren to the keeper. Iqbal, meanwhile, kept finding the boundaries, and registered his first six when he blasted Roelef van der Merwe over long-off. He got a couple of more fours as Bukhari strayed in line and length. And, when Sabbir blasted van der Merwe over long-on, Bangladesh seemed to be getting some grip on the innings.

Rahman, however, fell next ball, as the bowler had his revenge with an arm ball. Shakib Al Hasan’s poor run continued, while the in-form Mahmudullah and the struggling Mushfiqur Rahim also fell cheaply. It was left to Tamim to give the innings some momentum. He did so, by creaming van der Merwe for a six over long-on, and then taking two classy boundaries off Logan van Beek. He began the last over with a massive six over midwicket, off the same bowler, as Bangladesh ended the innings with momentum on their side.

In response, Netherlands has played themselves into a decent position, reaching 112 for 3 in the 16th over. But, the last ball of that over saw Dutch skipper Borren falling to Shakib, as a sweep ended up as a top edge. Earlier, Shakib also took out Ben Cooper, who was looking dangerous on 20, as the batsman completely missed a slog sweep. Nasir Hossain accounted for well-set opener Stephan Myburgh, who had compiled a run-a-ball 29, cleaning him up as he too missed the sweep. Tom Cooper hit a couple of boundaries, and Bukhari too got some big hits towards the end. But, Bangladesh bowlers held their nerve.