England's Ashes hopes all but over after crumbling to woeful 67

Hosts England endured a terrible Day 2 at Headingley in the third Ashes Test as they folded up for 67 to all but put paid to their hopes of retaining the Ashes as Josh Hazlewood took 5 for 30. To put things into perspective, this is England's lowest Ashes total since 1948.Having bulldozed England, Australia ended the day at 171 for 6, with what seems like a match-defining lead of 283. Marnus Labuschagne, who contributed 74 in the first, continued his great run, remaining unbeaten on 53 at stumps. This was his third straight fifty after coming into the side as a concussion substitute for the injured Steve Smith at Lord's. 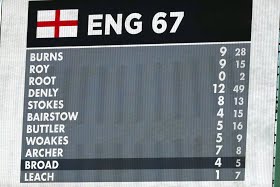 Things couldn't have been worse for England as their captain Joe Root continues to endure a miserable run. He was dismissed for a duck that too in front of his home crowd. That's not all. Under pressure, he even dropped a simple catch of Labuschagne on 14. It may be recalled that Root had made a golden duck at Lord's as well.There seemed to be no end to England's problems as their bowling star Jofra Archer, who picked up six Australian wickets in the first innings, went off the field with cramps. He did return to the field later, in some respite for the hosts.England continued to fumble in the field as Jonny Bairstow dropped Labuschagne on 42, failing to hold a low diving catch. Coming to England's batting, only one batsman Joe Denly reached double figures but his contribution of 12 was hardly significant.Struggling opener Jason Roy fell for nine, edging Hazlewood to David Warner. Root also fell in the same fashion as England found themselves in early trouble at 10 for 2.Hopes of another gem from Ben Stokes, who slammed at hundred at Lord's, did not come true as the all-rounder had a rare failure. He went after a wide half-volley off James Pattinson but only managed to bring further joy to Warner who claimed another catch.England went to lunch at 54 for 6, and Hazlewood ended their misery by cleaning up last man Jack Leach. It was the fourth time in the last two years that they had been dismissed under 100 -- 58 by New Zealand (Auckland 2018), 77 by the West Indies (Bridgetown 2019) and 85 by Ireland at Lord's as recently as last month.
--By A Cricket Correspondent