IPL 2016: Pune put up a good all-round show against Delhi

Rising Pune Supergiants had been struggling in their last few matches to put up a competitive performance. The fact that they were battling a number of injury issues did not help their cause.

Rising Pune Supergiants had been struggling in their last few matches to put up a competitive performance. The fact that they were battling a number of injury issues did not help their cause. On Thursday, against Delhi Daredevils at the Feroz Shah Kotla, they got their act together. Bowling first, they did well to restrict the Daredevils to a very much gettable total. Then, they also put up a solid batting effort, with one batsman anchoring the innings, and the others playing good supporting acts. It was the kind of performance Pune needed from their team. As for Delhi, it was a bad day when they were off sync.

A well-oiled bowling performance set up the match nicely for Pune. Since chasing has been the flavour of the season, they would have been confident conceding anything under 170, and they successfully did the same. Most of the bowlers chipped in with decent efforts, but it was Rajat Bhatia, who stood out with his experience and accuracy. Bhatia completely stifled the Delhi batting as they looked to push on. Ashok Dinda got the early breakthrough for the team while Scott Boland picked up a couple of key wickets. Again, Ravichandran Ashwin wasn't among the wickets while Murugan Ashwin was also expensive, so there are still issues for Pune.

Once Pune restricted Delhi to under 170, they were always favourites to win. But, they still needed to get off to a good start, considering their failures in recent matches. This is where Ajinkya Rahane was very good. He shepherded the innings nicely, and never allowed any kind of pressure to build during the chase. Rahane was all at ease, hitting the boundaries whenever he wanted to. Rahane was well supported at the top by new opening partner, IPL debutant Usman Khawaja. Once he was dismissed, the others also chipped in with Saurabh Tiwary, MS Dhoni and Thisara Perera all playing good cameos.

Delhi definitely lost the match after they failed to put up a competitive score batting first. The wicket of Rishabh Pant early on was a big blow. Most of the other batsmen got starts, but none carried on, and that is what hurt the team the most. Sanju Samson, who was promoted to open, Karun Nair, JP Duminy and Sam Billings all got into the 20s and 30s, but that was about it. Carlos Braithwaite came in towards the end, and smashed a few big sixes, which enabled Delhi to finish on a high. But, the eventual target still wasn't a convincing one. 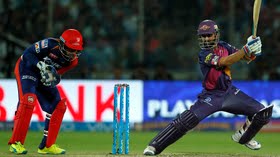 There was bad luck for Delhi in the bowling as well as skipper Zaheer Khan was down with a niggle. In his absence, the bowling attack could lacked teeth at the start. This was a chance for Mohammad Shami to stand up and deliver. Instead, all he managed was to be the most expensive bowler on the day. Amit Mishra and Imran Khan kept Delhi's slender hopes alive by building some pressure. The kind of total they were defending though, Delhi needed a good all-round effort from their bowlers, which was lacking.