Ravichandran Ashwin claimed five wickets, and Amit Mishra chipped in with three, including the final one, as India defeated Sri Lanka by 278 runs on the final day to square the three-match series 1-1.

Ravichandran Ashwin claimed five wickets, and Amit Mishra chipped in with three, including the final one, as India defeated Sri Lanka by 278 runs on the final day to square the three-match series 1-1. India had the Lankans 9 wickets down prior to launch itself. But, a heavy shower forced the teams to head for early lunch. On resumption, Mishra trapped Dushmantha Chameera LBW with a wrong one to send India into jubilation. Sri Lanka, resuming at 72 for 2, collapsed to 134 all out. There was no fond farewell for Kumar Sangakkara, even as Virat Kohli finally experienced a Test win as captain. 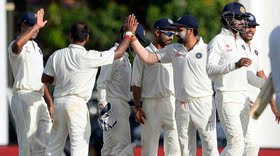 The day began on a perfect note for India as Umesh Yadav sent back danger man Angelo Mathews with the first ball of the day. Mathews poked at a teasing length ball outside off and was impressively caught by substitute wicket-keeper Lokesh Rahul. There were to be no heroics from Dinesh Chandimal on this occasion. He went for a sweep against Mishra, but was beautifully beaten with the drift, and was clean bowled for 15. Lahiru Thirimanne followed next. He tried to work Ashwin on the leg side, but without conviction, and got a leading edge, which was superbly anticipated by Cheteshwar Pujara at silly point.

Sri Lanka had lost half their side for just over 100. Ishant Sharma drew an edge from Jehan Mubarak not long after, and Kohli accepted it gleefully at slip. Dhammika Prasad then played at torrid hoick against Ashwin, and was held by Mishra. Dimuth Karunaratne also gave up the fight on 46, as he was clean bowled by an arm ball from Ashwin. Mishra trapped Tharindu Kaushal and Chameera lbw either side of the rain break to finish off things.