Virat Kohli never used to do like this earlier: Aakash Chopra worried about former captain’s methods

Former India opener Aakash Chopra has opined that ex-skipper Virat Kohli is playing risky cricket, which is one of the reasons why he has not been able to overcome his poor form. After failing to register a decent score in any of the three ODI matches against West Indies, Kohli was dismissed for 17 in the 1st T20I as well on Wednesday.

The 33-year-old was caught at long-off, trying to take on left-arm spinner Fabian Allen. He went for his strokes even though India had just lost a couple of wickets in quick succession during the match played at the Eden Gardens in Kolkata. According to Chopra, this is not how Kohli played earlier. He stated that the India No.3 batter’s manner of dismissals in recent times are a matter of concern.

Speaking on his YouTube show, Aakash Chopra said, "Virat Kohli never used to do like this earlier, that if a six is not required, he never used to hit it and scored through singles or fours. He was risk-averse, that he will not play the risky shots at all. That is what Virat was all about but now he is not playing like that and that is a bit of a concern." 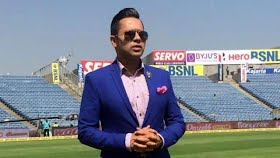 "The way Kohli got out, discipline was making him the greatest batter on the planet, what would have happened if that shot had gone for a six? Nothing would have happened, you wouldn't have won the match because of that six. But when you get out, the team is also stuck slightly," Chopra added.

Before the 1st T20I, Kohli had scored only 26 runs in the three-match one-day series. He was out for a four-ball 8 in the first game, looking to go after the bowling without getting set. According to Chopra, there needs to be greater conversation around the star batter’s form.

He said, "Kohli did not score runs again and the way he is getting out, that's very unlike him. We are doing very little conversation about Virat Kohli, which is never a good thing. We are not even talking about him, that is hurting me, that must be hurting him.”

The 2nd T20I of the three-match series between India and West Indies will be played at the Eden Gardens in Kolkata on Friday, February 18.