Buoyed by their fightback at Manchester, England would be keen to maintain their momentum going into the fourth ODI at Leeds. In spite of their comprehensive win, England remain in a tough position

Buoyed by their fightback at Manchester, England would be keen to maintain their momentum going into the fourth ODI at Leeds. In spite of their comprehensive win, England remain in a tough position, as they need to come out on top in the next two games to clinch a come-from-behind series victory. As such, the Englishmen cannot afford to falter at any stage during the next two games. They should take it one game at a time though for a loss at Leeds would put paid to their hopes of winning the series. Australia, on the other hand, would be disappointed with their effort at Manchester, but they surely know how to win, and would be keen to return to that formula. 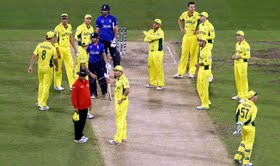 England gained plenty of positives from their big win in the third ODI, the biggest was obviously the match-winning century by James Taylor. With Joe Root being rested for the one-dayers, England were searching for a suitable replacement, and Taylor has fit in unexpectedly well. Although he did not get big scores in the first two games, he looked in good nick. It all came together for Taylor at Old Trafford, as he compiled his maiden century and led England to victory. It was a typical old school one-day hundred as Taylor built an innings of prominence. It would be difficult to keep out Taylor from the playing eleven now even when Root returns to the side.

The performance of England spinners Adil Rashid and Moeen Ali was also top class at Manchester. Of course, they were aided by the conditions, but they certainty have done well even otherwise. In the first match, Rashid claimed four scalps while Moeen was economical. England would be extremely pleased with the performance of their skipper Eoin Morgan as well, who has excelled with the bat. Upcoming opener Jason Ray has also impressed, and the next step for him should be to try and get big scores. England though would be worried with the continued failures of Alex Hales. Also, although Steven Finn hasn't done badly, being the leader of the attack, England expect more from him.

Australia have been hurt by injury woes to David Warner, a big blow, and Shane Watson. But, they should still be confident of their batting abilities, for they have a strong line up. Aaron Finch made an impressive comeback from injury with a fifty, and Joe Burns has looked good as well even as he has failed to get big runs. Skipper Steven Smith remains on top of his game. His failure in the previous ODI was a rarity. The middle and lower order is strong, with the likes of George Bailey, Mitchell Marsh and Matthew Wade, all of whom have performed well. They need to put behind the Manchester failure and start afresh.

Bowling is a definite area of concern for the Aussies. Of course, England have also been poor when they have bowled first. So, that has been a pattern of sorts. But Australia, being a world champion side, will expect better from their bowlers. Mitchell Starc, the World Cup hero, has looked particularly out of sorts. James Pattinson also proved expensive while Pat Cummins also failed to make much of an impression. In fact, leaving apart debutant spinner Ashton Agar, no one made an impact at Manchester. The fifth bowler is also a worry with Mitchell Marsh and Glenn Maxwell not doing a lot. Australia have things to ponder upon.