The West Indies romped to victory by five wickets on today’s fourth day at Sabina Park. Night-watchman Kemar Roach scored an aggressive 41, and had a 70-run fifth wicket partnership with Shivnarine Chanderpaul, who finished unbeaten on 43.

The West Indies romped to victory by five wickets on today’s fourth day at Sabina Park. Night-watchman Kemar Roach scored an aggressive 41, and had a 70-run fifth wicket partnership with Shivnarine Chanderpaul, who finished unbeaten on 43.

The target was 206, and with 74 still required at the start of play, and tropical storm Ernesto expected to bring loads of showers to the vicinity, the visitors would have wanted to prolong the proceedings and make life as difficult as possible for the hosts. But Roach came out with a flurry of strokes to kill such hopes from the minds of the New Zealanders and their fans. 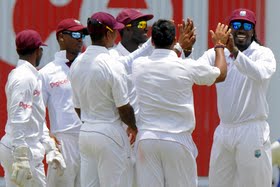 The Barbadian fast-man was clearly in no mood to hold back or to play second fiddle to his more illustrious partner. In one over from Southee he drilled the first ball violently down the ground for four, before lofting the fifth over point off the back-foot for another boundary.

They sent some short-pitched deliveries his way, and had him in trouble a few times, but the Barbadian remained positive throughout. His 60-ball innings contained four boundaries--though he attempted to hit quite a few more—and by the time he was caught at backward point off Kane Williamson, only 23 were required. Deonarine then joined his fellow Guyanese left-hander and cruised to victory with little bother.

The New Zealanders were thoroughly outplayed. Their bowlers did well to restrict the home team in the first innings. They were consistent and incisive in giving their side the upper hand on the second day, only for their reckless batsmen to fritter their advantage away on the third. Even captain Ross Taylor, perhaps their most accomplished player, will need to answer for the manner of both his dismissals in this test.

But the main reason they lost was probably the masterful batting of Marlon Samuels. Having missed opportunities to dismiss him fairly early in both innings, the stylish Jamaican guided his side to almost touching distance of the visitors score in the first innings, and placed them on path to victory in the second. His magnificent batting was no surprise to those who saw him dominate a much more potent England attack early in the summer, and he had also scored a century in the second 50-over game held at Sabina Park a few weeks earlier.

This was a welcome win for the West Indies. The last time the Caribbean team won more than one test against a major test nation (not counting Zimbabwe and Bangladesh) was in 2002 when it completed a 2-1 win against India at Sabina Park. Their long-suffering fans will be hoping they will not have to wait quite as long again.