West Indies slipped to a sorry 43 for 3 by stumps in just 12.2 overs. The writing is on the wall for a second consecutive innings defeat inside three days for the tourists. Windies have a long way to go make India bat again with a huge deficit of 270 runs to clear.

West Indies slipped to a sorry 43 for 3 by stumps in just 12.2 overs. The writing is on the wall for a second consecutive innings defeat inside three days for the tourists. Windies have a long way to go make India bat again with a huge deficit of 270 runs to clear.

The first West Indian wicket was gifted away to R Ashwin as opener Kieran Powell came down the track for a big hit but only to hole out to a well placed Shami at long off who plucked a low catch. With minutes to go before close, night watchman Tino Best was given lbw to an arm ball from Pragyan Ojha. Ashwin finished the day on a high squaring up Darren Bravo (11) on the backfoot to force an edge to second slip. The tourists have Chris Gayle surviving the torrid little phase on 6*.

Earlier in the evening, Rohit Sharma scored his second consecutive century in what is only his second Test match. West Indies had an early wicket with Bhuvneshwar Kumar caught at leg slip off a jumping delivery from Shillingford. It was the off-spinner’s fifth wicket. Pragyan Ojha got run out cheaply as India were reduced to 415 for 9. Rohit with the support of Mohammed Shami got through a superb partnership to stretch the lead by 80 more runs. Rohit took most of the strike and in the process got to his century.

Update at Tea on Day 2: India eased into a big first innings lead at Tea by progressing to 413 for 7. Cheteshwar Pujara helped himself to a fifth Test century, Virat Kohli scored a busy half century and Rohit Sharma has batted positively to pile up the lead to 231 runs.

Kohli was the first man to be dismissed post lunch but not before he stroked 57 runs from 78 balls with 5 fours. Pujara got out, caught and bowled by Shillingford off a leading edge having scored 113 (from 167 balls with 12 fours). Skipper MS Dhoni was out cheaply to the second new ball with Tino Best luring him into a false drive. India slipped to 365 for 6 before R Ashwin joined Rohit to put up a sweet partnership.

Ashwin scored a quick 30 from 32 balls with 4 fours and a six and got out miscuing an ambitious pull off Gabriel. By Tea time, Rohit played some lovely shots to stretch the lead further. 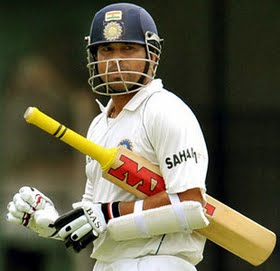 Update at Lunch on Day 2: The morning session promised a special from Tendulkar and he was looking well set to get that elusive Test century since Jan 2011. He got past the half century mark and was striding forward towards three figures but his over confident late cut off Shane Shillingford brought a massive disappointment to his well wishers. West Indian Captain Darren Sammy pulled off a blinder of a catch at slip, taking the fast flying edge from Tendulkar almost in front of his face! That was the end of what could be Tendulkar’s last ever knock for India, and it wasn’t a bad one at all, with 74 to his name. The Master lasted 112 balls striking a dozen boundaries. His partnership with Pujara for the 3rd wicket was worth 144 runs which took India into the lead.

By Lunch, India raced away to 282 for 3 with Pujara on 85* alongside Kohli, who is on 36. The lead is exactly 100 runs. Pujara too should have been dismissed in the morning session when he was on 76 but third Umpire Vineet Kulkarni gave him not out though replays showed that the former was caught cleanly at shortleg off Shillingford.