When the match started with the Sunrisers batting first, it looked as if it was going to be low-scoring affair as the visitors were pegged back early at 37 for 3 in the 5th over. Mohit Sharma moved the ball around off the seam nicely to take two out of those three wickets. CSK failed to get rid of Shikhar Dhawan early and the left-hander playing his first competitive game after cracking a debut century against Aussies showed lots of confidence in his strokeplay.

In the 14th over, Sunrisers were given a blow as a well set Shikhar Dhawan had to retire hurt after getting hit on the groin with the score at 83 for 4. A couple of hefty blows from Sammy took Sunrisers to 116 for 2 in the 18th over before Dhawan replaced him and changed his team’s fortunes completely with Ashish Reddy. Dhawan finished with a brilliant 63* from 45 balls with 10 fours while Ashish Reddy came up with a crucial cameo of 36* from 16 balls with 2 fours and 3 sixes to lift the Sunrisers to a formidable total of 159 for 6. As usual, R Ashwin bowled well for CSK, this time with figures of 4-0-21-1.

Chennai Super Kings were nicely set up for the run chase by a solid opening stand of 65 in 7.3 overs. While Vijay played slowly for his 22-ball 18, Michael Hussey showed good form to score an aggressive 45 from 26 balls with 5 fours and 2 sixes. Hussey fell in the 10th over after getting a bat pad inside edge in a sweep off Mishra which was taken by the keeper. 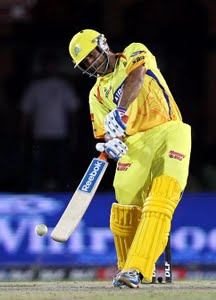 Sunrisers bounced back in the game through its two leggies – Mishra and Karan Sharma who got the ball to spin away from the right handers. Karan Sharma was at times unplayable for the CSK batsmen. In the 14th over, CSK lost Suresh Raina caught at long on off Mishra and that left MS Dhoni and Bravo to complete the match. While Dhoni straightaway got going, Bravo struggled and even played out a maiden over from Karan Sharma in the 16th over! Bravo threw his wicket away with a 16-ball 7.

After Bravo, Jadeja came in and got out for 1 from 4 balls leaving MS Dhoni all alone in chasing down the target. The CSK Captain punished Dale Steyn’s short pitch deliveries to keep the equation under a check. In the final over, CSK needed 15 to win which was a stiff task but Sunrisers went to the inexperienced medium pace of Ashish Reddy ahead of Sammy and the match was done and dusted with a couple of balls to spare. Dhoni finished the match in style with a magical knock of 67* from 37 balls with 7 fours and 4 sixes.

Although Sunrisers lost the match, a lot of praise needs to be given to its two leg spinners. Karan Sharma seems to be heading towards an India Cap after producing outstanding figures of 4-1-8-0. Amit Mishra on the other hand once against got amongst the wickets to keep his team in the contest.

Toss and Teams: Sunrisers Hyderabad have won the toss and elected to bat first against hosts Chennai Super Kings at the MA Chidambaram Stadium.