South Africa innings: South Africa have left India with yet another big target to inch towards a 3-0 cleansweep. Quinton de Kock scored a third consecutive ODI ton and Skipper AB de Villiers came up with his 16th ODI ton to carry South Africa to 301 for 8 in the Third ODI at Centurion.

It wasn’t all easy for South Africa this time as India had picked up three early wickets inside the first 10 overs. Hashim Amla fell to an innocuous full toss from Mohammed Shami which he flicked straight to squareleg in the 5th over. The real damage was done in the 8th over when Ishant Sharma scalped two batsmen – Henry Davids and JP Duminy who were both caught by Raina at second slip. Ishant had got the ball to nip away on both the occasions. 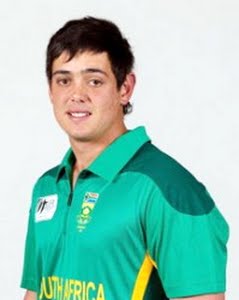 Despite having SA on the backfoot, Team India struggled to make further inroads. Quinton de Kock had the luck with him as well; dropped twice on 27 and 43. There was no stopping after that for the young man who made those fielding lapses count to score his 4th ODI century. Skipper AB de Villiers batted positively with de Kock to lift SA from 28 for 3 to 199 for 4 by the 38th over.

Quinton de Kock’s innings came to an end when he missed his slog off a slower one from Ishant Sharma. De Kock scored 101 from 120 balls with 9 fours and 2 sixes. AB de Villiers got out six overs later having scored 109 from 101 balls with 6 fours and 5 sixes. De Villiers got out lbw after walking a long way across in a flick and missing an Umesh Yadav inswinger.

India failed to keep South Africa under 300 although they had them down to 252 for 5 in the 44th over when they got de Villers’ wicket. And that was because David Miller smashing an unbeaten 56 from 34 balls with 5 fours and 3 sixes.

Ishant Sharma was the only bowler to command any respect and he finished with great figures of 10-1-40-4. Mohammed Shami picked up three wickets for the third time but was taken for 69 in his 10 overs.

Toss and Teams: South Africa have won the toss and elected to bat first in the Third and final ODI at the SuperSport Park in Centurion. The pitch for this game is ideal for batting with very less grass cover. India has made one change with Yuvraj Singh returning in the place of Ajinkya Rahane.

South Africa have weakened their side by resting its two fast bowlers – Dale Steyn and Morne Morkel. Jacques Kallis has also been rested ahead of the Test Series. In their place come Wayne Parnell, leggie Imran Tahir and Henry Davids.