Can this be Yusuf Pathan’s second coming?

Somewhere during the early phase of IPL 7, when Kolkata Knight Riders were struggling to find their groove, we had done a statistical feature on how Yusuf Pathan’s career had nosedived after a wonderful start -- Yusuf Pathan: The gigantic fall.

Somewhere during the early phase of IPL 7, when Kolkata Knight Riders were struggling to find their groove, we had done a statistical feature on how Yusuf Pathan’s career had nosedived after a wonderful start -- Yusuf Pathan: The gigantic fall. We had also raised questions over whether he was a finished product as far as IPL is concerned leave alone international cricket. After all, he had hardly done anything of note in the last couple of seasons and had retained his place in Kolkata Knight Riders purely on reputation build in the past. On Saturday against Sunrisers Hyderabad though, he made an extremely strong statement. 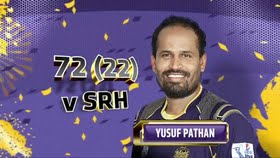 Pathan’s record-breaking knock against Hyderabad wouldn’t surprise those who have followed his antics since 2008, when he started off with Rajasthan Royals. But, having seen him struggle over the last couple of years, and for most part, this season as well, his smashing knock was something that came out of the blue. He did get 41 against Chennai in an earlier match and 39 not out against Hyderabad the last time these two teams met, but the fluency one associates with Pathan cameos was not there completely, and he had low scores in most of the earlier matches as well.

When a player is going through a rough phase, he needs a bit of luck. Pathan did not have it last year, when he was batting brilliantly in a crucial game, but was given out obstructing the field, and it eventually resulted in Kolkata exiting from the tournament. In the knock against Hyderabad on Saturday, Pathan got some slices of luck that have deserted him so often over the years. He could have been out early on more than one occasion, but the opponents let him off, and Pathan made they pay dearly, knocking Hyderabad out of the tournament.

What helped Pathan’s cause on Saturday was the fact that the situation was tailor-made for his style of play. Kolkata had already qualified for the play-offs, but to finish in second place, they needed to wipe out Hyderabad’s target with a number of balls to spare. It was a situation in which Pathan had nothing to lose. Had he got out early going for a big stroke, it would have been considered a sacrifice Pathan made for the team’s cause. With his form, he wasn’t expected to pull it off as well, so there wasn’t much pressure on him to deliver. Possibly, that is what brought out the best in Pathan.

Although his knock on Saturday was exceptional, it would still be too early to conclude that Pathan is back to his peak form. He needs to deliver in the remaining big matches to prove that he is back with a bang. For now, KKR and Pathan should be pleased with the manner in which the latter has roared his way back into the limelight. At the beginning of IPL 7, Pathan had said he will play a knock that he would dedicate to his newborn baby. This possibly was the one, but KKR will actually hope there are many more to come.