Here's what Kumble has to say about Bangladesh, the Test team

Irrespective of India's impressive record against Bangladesh in the Test format, head coach Anil Kumble has insisted that the hosts will not take the visitors lightly in the one-off Test that begins in Hyderabad on Thursday.

Irrespective of India's impressive record against Bangladesh in the Test format, head coach Anil Kumble has insisted that the hosts will not take the visitors lightly in the one-off Test that begins in Hyderabad on Thursday.

Addressing the media on the eve of the Test, Kumble said, “We would like to take every team the same way in terms of what they bring to the table. Bangladesh is a very improved side.”

It would be pertinent to note that Bangladesh have never beaten India in the longer format of the game, but Kumble pointed out to Bangladesh's recent exploits in New Zealand.“They have had a very good outing in New Zealand although the results are different, but Bangladesh going to New Zealand and doing what they did… we certainly respect the opposition.”

“No matter who the opposition is, we would like to measure our own performances and treat every game in that fashion rather than look at the opposition. If we can continue to do that then the results will come our way. And Bangladesh has some quality players, good all-rounders. So, it is going to be a very interesting contest.” 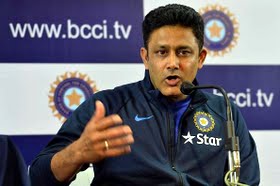 Bangladesh notched up 595/8 in the Wellington Test with Shakib Al Hasan hitting 217, and Mushfiqur Rahim 159, before a stunning batting collapse saw them lose the Test.

Despite the recent struggles of the openers Murali Vijay and KL Rahul, Kumble backed the duo. “I don’t think the opening slot is a concern at all. Vijay and Rahul have played wonderfully well in the last series. It’s just that you need a back-up. As far as we are concerned, openers have had issues, in the West Indies and in the home series as well. It’s just a concern,” he said.

“Abhinav brings in not just the experience of playing at the international level but also lots of runs in the domestic season just gone by. So he is in good form. And it’s a reward for what he has been able to achieve in the domestic circuit,” he added.