Gujarat Lions, who have been the team of the tournament thus far, with three convincing wins in as many games in their debut season, will take on Sunrisers Hyderabad at their home ground at Rajkot on Thursday. While Lions go into the contest having defeat Rising Pune Supergiants, Kings XI Punjab and Mumbai Indians

Gujarat Lions, who have been the team of the tournament thus far, with three convincing wins in as many games in their debut season, will take on Sunrisers Hyderabad at their home ground at Rajkot on Thursday. While Lions go into the contest having defeat Rising Pune Supergiants, Kings XI Punjab and Mumbai Indians, Sunrisers have only managed to win one out of three contests. But, the significant bit here is that the win came in their last encounter against Mumbai, and too in a convincing manner. And so, while they will head into the match as underdogs, they will definitely go in with the right frame of mind.

The Lions have been served brilliantly by Aussie Aaron Finch at the top of the order. In all three matches that the Lions have won, he has been the chief architect, with fifties in each of these contests. His scores in the series thus far read 74, 50 and 67 not out. Finch will hope to continue his great run, as would the team. Among others Brendon McCullum hasn't really fired apart from one match. Skipper Suresh Raina has got starts, but has failed to carry on, and continues to struggle against the short ball. Dinesh Karthik and Dwayne Bravo are other key components in the batting order.

In the bowling department, the Lions would be happy to see Ravindra Jadeja back in the playing eleven. He missed the previous encounter as he was away for his marriage. Lions have one of the better bowling attacks in the competition with the likes of Bravo and James Faulkner, who are among the best death bowlers in the business. At the start, Praveen Kumar has been doing a good job, while they also have two effective spin bowlers in Pravin Tambe Shadab Jakati.

As for the Sunrisers, it wouldn't be wrong to say that skipper David Warner has been carrying the team on his shoulders, and has almost singlehandedly been leading the batting. The injuries to Yuvraj Singh and Kane Williamson have definitely been big blows for the visitors. At the same time, they would be extremely worried with the manner of Shikhar Dhawan's struggles, who hasn't even crossed single-figures in three matches. Another failure, and Hyderabad will have to seriously consider dropping him, and rejigging the batting order. Eoin Morgan could possibly bat higher up with the order while Moises Henriques will be expected to come up with bigger knocks. 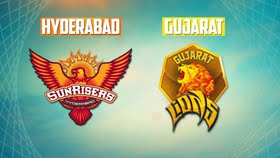 There are injury worries for Sunrisers in the bowling department as well. Ashish Nehra is not expected to be fit for the Lions encounter as well. In his absence, Mustafizur Rahman has led the charge admirably for the team. India's Bhuvneshwar Kumar has also done decently although he hasn't looked threatening. Barinder Sran too has impressed a couple of times, but they are missing that one bowler with extreme pace. Henriques is another option they have in their kitty while Bipul Sharma could play the main spinner's role. With weak bowling, Sunrisers might have to bat out of their skins to put it across the Lions.