Warner hit 107 from 111 balls as Australia outclassed Pakistan by 41 runs. Warner and skipper Aaron Finch gave the team a perfect start as the latter also chipped in with a well-compiled 82. At one stage, Australia looked set for a 350-plus total. However, a five-wicket haul from Mohammad Amir saw them crumble to 307 all out. 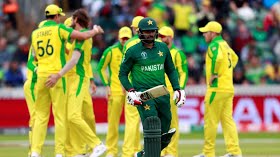 Despise a fifty from Imam-ul-Haq and 40s from Mohammad Hafeez, Sarfaraz Ahmed and Wahab Riaz, Pakistan were never quite in control of the chase as they kept losing wickets every time a partnership was developing. Pat Cummins was the standout bowler for Australia with 3 for 33.

"This century means a lot as a batsman. Some great efforts from Pakistan. Our bowlers were fantastic but it was a great game," Warner said afte winning the man of the match award. This was Warner's first hundred since returning from the ball-tampering scandal.

He admitted Australia should have scored a lot more than 307. "When I got out, we had 70 balls to go. As a batter, you want to bat 50 overs. We should've been around 340-350, credit to Pakistan's bowlers. Their second spells were outstanding and they made it hard for us," added Warner.

Warner also explained that he had to adapt to the conditions early on as there was definite moment. "It was a used wicket; it was a tad dry and they bowled very straight lines to me and gave me no width. There was a bit of movement early on, so I had to be a lot tighter," Warner added.