Australia wobble on a good batting surface at Mohali

India bowled out as many as 104 overs in six and a half hours to restrict the Aussies to 273 for 7. This was despite the tourists getting a strong opening stand of 139! It was a dramatic collapse for the Aussies – losing two wickets in two balls on two occasions in the day’s play. The match is now nicely in the favour of an Indian victory although the first day’s play was completely washed out.

Update at Stumps on Day 2: India bowled out as many as 104 overs in six and a half hours to restrict the Aussies to 273 for 7. This was despite the tourists getting a strong opening stand of 139! It was a dramatic collapse for the Aussies – losing two wickets in two balls on two occasions in the day’s play. The match is now nicely in the favour of an Indian victory although the first day’s play was completely washed out.

The final session saw R Ashwin providing the opening by inducing an edge from the stubborn Ed Cowan in a frontfoot defence and Virat Kohli at slip finally caught something flying his way. This was Kohli’s third catch at slip, two of which he had dropped early on in the day’s play. Ashwin got his first success of the match by putting in lots of body behind his off break and got it to turn away with bounce to force a thick edge from Cowan (86 from 238 balls with 8 fours) in the 78th over.

Australia recovered after the early loss of Cowan as Brad Haddin joined Steven Smith and batted with positive intent. Just when the visitors were going along smoothly with a 46-run stand, came a double blow from Ishant Sharma who was now reversing the old soft ball. Brad Haddin (21 from 36 balls with 2 fours and a six) was first to depart when he dragged a forcing square cut onto the off stump in the 94th over. It was a delivery that wasn’t there for the cut and Haddin was just too early in it. A couple of balls later, Ishant bowled a late inswinger at length which brushed the pad of Moises Henriques (0) and then deviated away to his off stump.

By the close of play, Ravindra Jadeja provided another breakthrough for India when his deadly arm ball was too good for Peter Siddle (0 from 14 balls) and had him plumb infront of middle. At Stumps on Day 2, Australia have got the young Steven Smith battling on with his 58* (from 137 balls with 7 fours and a six) along with Mitchell Starc who is on 20* (from 21 balls with 3 fours). India did not take the second new ball although it has been long overdue.

Update at Tea on Day 2: Australia wobbled in the post lunch session losing two wickets in two balls after a splendid century stand from the openers and then lost one more to concede its advantage to India. At Tea, Australia have recovered slightly to 180 for 3 in 72 overs with Ed Cowan on 76* batting along with Steven Smith, who has looked positive so far for his 19*. 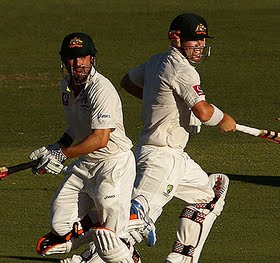 India’s much needed break came in the 48th over when David Warner came down the track to flick a Jadeja delivery but wasn’t there to the pitch of the ball. That flighted delivery turned in sharply and bounced to take a feather inside edge onto the pad and lobbed up to the onside. An alert MSD Dhoni ran forward to take the catch to send back the dangerous Warner (71 from 147 balls with 9 fours) with Australia at 139 for 1. The very next ball, Michael Clarke coming in at no.3 was out for a first ball duck to Jadeja! Coming down the track straightaway, Clarke looking to play a defensive shot was comprehensively beaten by the sharp turn around middle and was stranded miles out of the crease to get stumped out by his counterpart.

A struggling Phil Hughes who is playing this game only because of the ban on Usman Khawaja continued to have a torrid time in this series. The left-hander fell cheaply again, this time scoring 2 from 31 balls before he gloved a backfoot flick off a turning and bouncing delivery from Pragyan Ojha down the legside to the keeper with the Aussies slipping to 151 for 3 in the 60th over. Cowan and Smith batted decently to prevent further inroads from the Indians before Tea.

Update at Lunch on Day 2: Australia had a great time in the extended morning session as its opening batsmen put up 109 for no loss in 36 overs on a flat looking batting surface at Mohali. David Warner showed lots of patience to remain unbeaten on 54*. His opening partner Ed Cowan was playing his naturally defensive game to collect 43* by lunch. Nothing really happened for the Indian bowlers except for the odd ball turning for R Ashwin which one would expect on a pitch that has been under covers for a long time.

Toss and Teams: The Third Test Match at Mohali is finally underway thanks to bright sunshine on Day 2. Australia have won the toss for a third consecutive time and they have once again decided to bat first. The visitors have made quite some changes to their XI with Steven Smith, Brad Haddin, Mitchell Starc and Nathan Lyon coming in for Shane Watson, Matthew Wade, James Pattinson and Glenn Maxwell. India have made two changes with debutant Shikhar Dhawan and Pragyan Ojha coming in for Virender Sehwag and Harbhajan Singh.

The pitch at Mohali is dry and should aid the spinners as the match progresses. It is expected to be flat and hard which means that the ball should come onto the bat nicely. There would be some moisture in the track because of yesterday’s rain.