CWC 2015 AUS vs IND Preview: India may be the unbeaten team along with New Zealand in the current World Cup. But that, in no way makes them favourites to win the semi-final clash against Australia on Thursday.

India may be the unbeaten team along with New Zealand in the current World Cup. But that, in no way makes them favourites to win the semi-final clash against Australia on Thursday. While India have had fantastic 2015 World Cup so far, a closer assessment will tell us that South Africa is the only high quality opponent they have come across so far. And, to their credit, they overcame the challenge fantastically well, aided by awesome crowd support. All the other games have been against opponents who have been inferior to them in terms of talent. Thus, it wouldn't be wrong to say that Australia would be India's greatest challenge in the World Cup so far. 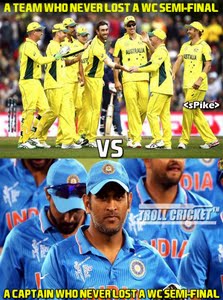 India have been in Australia since the end of 2014, and while they have been incredible in the World Cup, the fact is that they are yet to beat the Aussies during their current visit to the country. Be it Tests or one-dayers Australia have reigned supreme over the Indians. Traditionally as well, the Aussies have a great record against India at home. Even if you look at Sydney, where the semi-final is going to be played, India do not have a great record. Their only ODI win in recent times came in the CB series final, that too was back in 2008. History definitely favours Australia, and India will have to dig deep to overcome the Aussies.

Although Sydney is expected to offer a bit of turn, it is usually a batsman's paradise as the Australia-Sri Lanka high-scoring game pointed out. With wet weather conditions prevalent at the venue for now, the Indian spinners might have a tough task unless things clear out. Ravichandran Ashwin and Ravindra Jadeja would clearly be buoyed by how South African spinners succeeded at the same venue again Sri Lanka. But, the fact is that the pitch did not turn as much as expected. The Pakistani fast bowlers, Wahab Riaz in particular exposed a weakness in Australia's batting against the short ball. The Indian fast bowling has been in great shape, dismissing opponents, but can Mohammed Shami and co continue the good work against a batting line up that has troubled them for most part of the season?

India's batting will certainly be put to test by Mitchell Starc and co. Shikhar Dhawan may have reignited his career, but the Aussies who were all over him in the Tests and one-dayers would look to reopen old wounds. In a crunch game, the performance of Virat Kohli would be crucial. In case he fires, he can deliver the perfect counter punch to Australia. He is among the better players of short bowling in the Indian line-up, which is all the more reason why India will be keen for him to succeed. Suresh Raina is not someone who fancies the rising delivery, and the Aussies would target him for sure. Ajinkya Rahane looked under pressure in the quarters against Bangladesh. So he would be keen to get his act right as well.

Australia lost to India in the quarters four years back. But, India were the stronger side then, particularly under the conditions. Things are reverse in the present scenario, and Australia should be disappointed if they cannot put it across the Indians at home. Yes, Indians are expected to turn up in huge numbers at the SCG to support the men in blue. But, man to man, Australia remain the stronger side. They have innumerable match winners in David Warner, Steve Smith, Glenn Maxwell, Mitchell Starc, Mitchell Johnson and Josh Hazelwood. If it is their day, Aaron Finch, Shane Watson and James Faulkner can be a handful as well. If Australia perform to potential, they should meet New Zealand in the final at MCG.