Earlier in the day, Suresh Raina won the toss and elected to field first despite temperature being in excess of 40 degree C. Gujarat Lions played with an unchanged side but on the other hand Kings XI Punjab came up with four change in their playing side and the change in their commander too where Murli Vijay replaced struggling David Miller. Vijay opened the inning with Marcus Stoinis and provided KXIP a great start to their inning. The drives played by both these batsmen were gorgeous and they constantly lofted the ball over the 30-yard circle to exploit the batting powerplay in the first six overs. Bowlers of Gujarat were also guilty of pitching the ball short instead of try to swing it. Murli Vijay often stepped out of the crease too against Parveen Kumar too. Openers added 65 runs of 40 deliveries before Stoinis stepped out of the crease off Jadeja and missed the ball completely where Karthik behind the stumps made no mistake and took the bails off in flash. The wicket brought a little slide and Gujarat Lions were back in the game for some extent. Shivil Kaushik, whose action reminds everyone off Paul Adams came up with some extraordinary performance. First, Shaun Marsh was caught at deep mid-wicket and then on very next ball Maxwell was adjudged caught behind. Miscommunication between Gurkeerat Singh and Vijay took the wicket of the former. Then David Miller and Murli Vijay arrested the slide and done the repair work for a while before Vijay was holed out at deep mid-wicket. In the end Wriddhimaan Saha played a little cameo of 33 runs off 19 deliveries which help the visitors to put in excess of 150. But wickets trembling at regular interval, saw them bundling out for 154-runs in 19.5 overs. 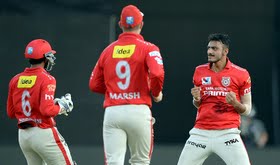 Gujarat Lions didn’t get the start which they are accustomed to. Brendon McCullum fall early in the inning which brought skipper Suresh Raina on the crease. He played few good shots before leaving a straight ball to rattle his stumps in anticipation of short delivery. Then came an over of Axar Patel where he took three wickets to reduce Gujarat Lions 39 for 5. Axar took consecutive wicket on the fifth and sixth bowl of his second over but he was taken out of attack as two left handed batsmen, Ishan Kishan and Ravindra Jadeja were out in the middle. But when he was brought to bowl the 11th over of the inning, he struck on his very first delivery to take the hat-trick. Ravindra Jadeja was given caught behind but the replay suggested that the ball never touched his bat in its way through to Karthik. But Ishan Kishan displayed his skills and showed the range of shots he had in his armory. But he was run out for promising 27. James Faulkner and Parveen Kumar continued the fight but all went in vain and KXIP registered a win over Gujarat Lions by 23 runs and this win will also refresh their campaign going into the business end of the tournament.