You are worse than coronavirus: Gayle blasts Sarwan over Jamaica snub

West Indian batsman Chris Gayle has launched a scathing attack on former teammate Ramnaresh Sarwan. Referring to the retired cricketer as 'snake' and 'worse than coronavirus', the southpaw termed Sarwan responsible for him not being retained by Caribbean Premier League (CPL) franchise Jamaica Tallawahs.

“Sarwan, you are worse than the coronavirus right now,” Gayle said, hitting out at the former batsman in a video on his official YouTube channel. With Jamaica deciding the let go of Gayle, he will now represent St Lucia Zouks in the 2020 CPL. The team is led by Darren Sammy and coached by Andy Flower. 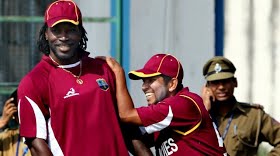 “What transpired with the Tallahwahs, you had a big part to play. Sarwan, you were the one who gave a big speech at my birthday party about how far we have come. Sarwan, you are a snake. You know, you are not the most loved person in the Caribbean. You are so vindictive, you are still immature, you are back-stabbing. When are you planning to change?" Gayle alleged in the YouTube video.

"That goes to show your own people undermine you. Doesn't matter how far you and they are coming from, they still undermine you," added Gayle.

"Out of that era - 1996 - I'm the only one active, playing. Everyone else retired. I'm the last man standing within that era...and I'm still going strong. So it kind of hurt them to see Chris Gayle still playing and still being successful. I'm talking about past and present players. But I'm dealing with you Sarwan. I'll deal whenever that time comes," the 40-year-old further warned.

"The amount of lies he used to tell on the players, him and the team management were not getting on," Gayle recalled, further criticising Sarwan, who was once touted to be the next best thing in West Indies cricket. Sarwan played 87 Tests and 181 ODIs from 2000-2013, scoring over 5,000 runs in both formats of the game.

Gayle represented Tallawahs in the first four CPL seasons before turning out for St Kitts and Nevis Patriots in the following two seasons. The CPL is scheduled to be held in August-Septemer. However, owing to the COVID-19 crisis, it is likely to be delayed or played behind closed doors, with nothing certain as yet.