Eden Gardens in Kolkata is all set to become the first venue in India to host Day/Night Test matches. Newly-elected BCCI President Sourav Ganguly had sent a proposal to Bangladesh Cricket Board (BCB) last week over the same, after Virat Kohli gave his go ahead.

As the BCB was dealing with the player revolt issue, they couldn't revert to the BCCI earlier. However, on Monday, BCB held a meeting with the players in Mirpur, and finally agreed to be part of the first Day/Night Test in India. The Kolkata Test will be the first D/N Test for both India and Bangladesh. 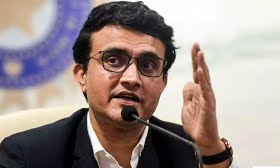 According to reports, the Test will be played from 2 pm to 9 pm. There will be a 20-minute break after the first session and a 40-minute break before the final zessio

It’s learnt that the daily timings of play in the Eden Test will be from 2 pm to 9 pm with a 20-minute tea break after the first session and a 40-minute supper break ahead of the final session.

Ganguly has been backing D/N Tests as part of an endeavour to bring crowds back to the stadium. The Cricket Association of Bengal (CAB) welcomed the move. "We will sit with the BCCI president to work out the modalities and ensure we are in sync with the plans of the board,” CAB secretary Avishek Dalmiya stated.

In June 2016, a local league match between Mohun Bagan and Bhawanipore Club was held with pink balls.

"It's a good development. Test cricket needs this push. Me and my team were bent on it and thanks to Virat (Kohli) also, he agreed," Ganguly told the Press Trust of India, after the development.

Bangladesh head coach Russell Domingo speaking to the media in Dhaka said, “I as a coach and the players think it’s a great opportunity. It’ll be a massive occasion under lights at Eden Gardens. So we’re very excited. We haven’t played a pink-ball Test but neither have India. It will be a new experience for both teams."

He backed Ganguly’s views on D/N Tests."Just the way the game is going, we’ve got to look at trying new things at certain times. We know it’s going to be a big challenge but sometimes change is the best thing,” Domingo further said.