India’s heartening bowling a silver lining in the cloud

It were the much-vaunted Indian batsmen that had to deliver if India wanted to do well against Pakistan. In complete contrast, they did miserably and the Indians expectedly went down in yet another high-profile series.

It were the much-vaunted Indian batsmen that had to deliver if India wanted to do well against Pakistan. In complete contrast, they did miserably and the Indians expectedly went down in yet another high-profile series. At the same time, India’s unheralded bowlers, of whom much wasn’t expected, came out of the series with their reputations enhanced. With Zaheer Khan’s bowling going downhill and Praveen Kumar still on the injury list, India had to go in with pretty much an unfamiliar bowling line-up into the much-awaited ODIs against Pakistan. And they came up with their best performance on the day when the batsmen put in their worst effort. 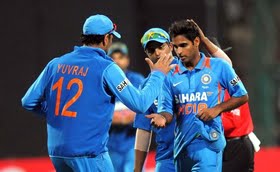 Going into the ODI on Sunday at the Kotla, the series was already lost, but India would have been desperate to somehow win avoid a whitewash against their old rivals. When the batsmen faltered for the third time in the series and crumbled for 167, it seemed like a hopeless case for India. Going into bowl, the Indian bowlers were under no pressure considering no miracle was expected of them. That probably worked in their favour. At the same time, it must be said that the Indian bowling was exceptional, especially from the two youngsters who made their debut in the series.

Bhuvneshwar Kumar has impressed right from the day he stepped onto the international arena, and he got the ball to talk again at the Feroz Shah Kotla. Along with the moment he has generated, it has been his control that has been exceedingly striking especially for someone so raw in international cricket. On Sunday, it was Kumar who again raised some hopes for India sending back Kamran Akmal and Younis Khan with excellent deliveries. In his short stint so far, he has shown a knack for picking up early wickets, which is definitely a good sign for the future of India’s bowling.

Kumar’s opening partner in the match, Shami Ahmed, who was playing his first international game, came up with an equally superlative performance. Although he had only a solitary wicket to show, the fact that he bowled as many as four maidens and conceded only 23 runs in his nine overs was a clear representation of how tight a leash he maintained on the Pakistan batsmen. For someone playing in his very first game, there would undoubtedly have been a lot of pressure, more so after India found themselves in with a chance courtesy Pakistan’s collapse. But Ahmed showed tremendous maturity to keep the Indians ahead.

It was also nice to see the more experienced Ishant Sharma and Ravindra Jadeja come up with the goods. The left-arm spinner was particularly miserly conceding only 19 runs in his ten overs and getting the important scalp of Umar Akmal. India can do with more such performances from Jadeja. He also made 27 with the bat which, in hindsight, was extremely precious. As for Sharma, he picked up big wickets, but his poor bowling at the death almost cost India the game, something he’ll need to work on.

Overall, India would be pleased by the performance of the bowlers. Now, if their batsmen can get their act together against England, things wouldn’t look as bad for India after all.