Having squared the series at MS Dhoni's hometown Ranchi, India put up another fantastic performance to clinch the T20 series with comprehensive victory at Vizag. If India's batting won them the second T20

Having squared the series at MS Dhoni's hometown Ranchi, India put up another fantastic performance to clinch the T20 series with comprehensive victory at Vizag. If India's batting won them the second T20, it was clearly their bowling which was influential in India's triumph in the decider. Dhoni's decision to bowl first on a track that was responsive to spin early on, clearly proved to be a smart move. Ravichandran Ashwin bowled brilliantly, and it was his spell that firmly put India in control, and paved the way for a series-clinching triumph. Ashwin was very well backed up by Ashish Nehra and Suresh Raina. 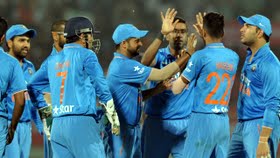 In T20s, a couple of overs can often make the big difference to the end result. And, this is exactly what happened in the Vizag match. Ashwin did what Kasun Rajitha did to the hosts in the first match. His dismissals of Niroshan Dickwella and Tillakaratne Dilshan in the very first over were massive blows. Not long after, he went on to add another big scalp of Dinesh Chandimal. Ashwin bowled with plenty of guile, and never allowed the visitors any sort of respite. By the time his spectacular spell of 4 for 8 was done with, Sri Lanka were in complete doldrums.
While Ashwin bowled brilliantly without doubt, it has to be said that Sri Lanka were handed more than one dubious decision, which did take some sheen off India's exuberant win. Dilshan's was given lbw when he came forward, and the ball hit him high on the pads. Asela Gunaratne was given out caught even though his bat was far away from the ball. Later in the innings, when the result was a formality, Sachchitra Senanayake was adjudged caught behind even though the bowler Raina did not appeal. The standard of umpiring clearly wasn't up to international standards in the game, and the visitors will have valid reasons to be aggrieved.
Even as Sri Lanka can count themselves unlucky with the umpiring decisions, it is equally true that they dug a hole for themselves with some poor strokeplay. Dickwella embarrassed himself by ending up being stranded down the pitch in the first over. Also, soon after Dilshan's big dismissal, Chandimal, who had just hit a couple of breezy boundaries, gave his wicket away to a slog. Dilshan himself played across the line even as he got a rough one. Further, at a time when Sri Lanka needed consolidation, Milinda Siriwardana played across the line to Nehra and lost his stumps.
India had every reason to be pleased with the victory, which reiterated that they are among the favourites to win the World T20. After Ashwin's initial brilliance, the likes Nehra, Raina, Ravindra Jadeja and Jasprit Bumrah ensured that the pressure remained on Sri Lanka till the end. Jadeja continued to be brilliant in the field, effecting a smart run-out. With the bat, Rohit Sharma may have been dismissed early, but Shikhar Dhawan continued his fine form, and eased his way in the chase. Ajinkya Rahane also took the opportunity to spend some time out in the middle. All in all, it was a perfect victory for Team India.
-- By A Cricket Analyst