Manish Pandey admits there is pressure, wants to cement place

Middle-order bat Manish Pandey has said that he is working hard to find a place in the playing eleven for India.

Middle-order bat Manish Pandey has said that he is working hard to find a place in the playing eleven for India. Pandey played an unbeaten cameo under pressure in the third ODI against Australia. 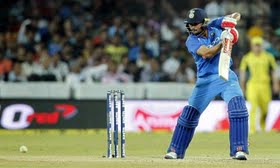 "Definitely, there is pressure in the middle-order. I would like to play more games and win matches for India. I am doing the hard work to try and find a place for me in the playing XI," he said in an NDTV report.

Pandey admitted it was a challenge batting at different positions. He was pushed down the order at Indore due to Hardik Pandya's promotion.

"It is completely different when you are playing number three, four or six. It is all about the mindset. It is about aggressiveness. I would like to spend more time on the wicket to make myself feel at ease at the crease," he said.