DD Vs MI: Sehwag showed that he is not finished yet

All this while, when Delhi Daredevils were losing match after match, we had maintained that this wasn’t an outfit playing to true potential. Looking at the kind of players they have in their midst, their performance had been a far cry from what it should have been.

All this while, when Delhi Daredevils were losing match after match, we had maintained that this wasn’t an outfit playing to true potential. Looking at the kind of players they have in their midst, their performance had been a far cry from what it should have been. On Sunday, against another struggling side, Mumbai Indians, at the Feroz Shah Kotla, they finally displayed their true capability and, in a manner of speaking, blew away the Mumbai challenge in no time. It was just the kind of triumph they needed to feel good about themselves.

Unlike in Tests and ODIs, a couple of individually brilliant performances are enough to swing the fortunes of a T20 game. And Delhi found their performers of the day in openers Virender Sehwag and skipper Mahela Jayawardene, an alliance which finally came good after six consecutive failures. Delhi were chasing a tricky target following a skilled batting effort from the guys from Mumbai. But, when Sehwag is no song, no target is too much for his side. This was clearly evident from the fact that Delhi went on to clinch the clash with three overs to spare. 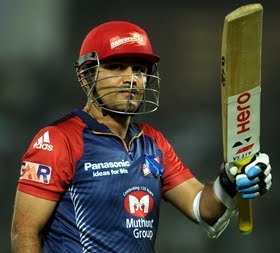 On paper, Sehwag and Jayawardene are equivalent to a perfect complementary pair at the top of the order. This aspect of their partnership was very much on show on Sunday. While Sehwag blazed his way through, Jayawardene caressed the ball through the gaps, as both maintained a high strike rate. Of course, as expected Sehwag ended up outscoring Jayawardene by some distance, but while the former played more big shots, the latter ensured that he gave Sehwag as much chance to do so, rotating the strike over frequently, whilst himself not going for the well-timed boundary scoring strokes.

After receiving their second pounding in a row, Mumbai would be wondering what they must do to get their act right. In this match, even Sachin Tendulkar made a significant contribution scoring a half-century. However, troubles at the top of the order continued to plague them. Ricky Ponting’s decision to demote himself and get Dwayne Smith to open did not work. Dinesh Karthik’s early loss also proved to be a big blow for Mumbai. Rohit Sharma blasted yet another superb IPL half-century. But, on a day when Sehwag was at his roaring best, nothing was going to be too much.

Turning point of the game: The fourth over of Delhi’s chase, which produced 17 runs, and set the tone for their triumph.