India stand-in skipper Rohit Sharma dedicated his third double century to his wife Ritika Sajdeh as it was their second anniversary, after India trumped Sri Lanka to level the series on Wednesday.

“I’m happy my wife is here with me on this special day. I know she would have liked this gift from me. She has been my strength. She has always been there for me. You go through so much stress in this sport, and having them around is always special,” Rohit said at the post-match press conference. 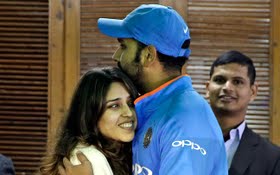 “This is our second anniversary, but more than that, we won the game. We were determined to do the right things in the middle, and right till the end we did that. As a group, we are looking forward to Vizag,” the skipper added.

He hit 12 sixes and 13 fours in his innings as India trounced Lanka by 141 runs.