India eased to a 7-wicket win over defending champions West Indies at Mirpur. It was a one-sided contest after the Windies were kept down to a low total of 129

India eased to a 7-wicket win over defending champions West Indies at Mirpur. It was a one-sided contest after the Windies were kept down to a low total of 129. India took the game till the last over though. Rohit Sharma helped himself to an unbeaten 62 from 55 balls with 5 fours and 2 sixes. Virat Kohli got amongst the runs again, scoring 54 from 41 balls with 5 fours and a six.

Amit Mishra was the Man of the Match for a second time in a row. 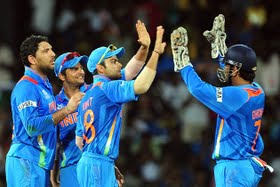 West Indies batting: West Indies batted extremely poor to come up with a below par total of 129 for 7 after being put into bat first by Dhoni. 21 runs off that total came in the final over from Ravindra Jadeja. The Windies struggled so much that they took 18 overs to get past the 100-run mark.

It was an indifferent start from Chris Gayle and Dwayne Smith that played into the hands of India. Gayle was very sedate and Smith was struggling to put the ball away. Gayle despite getting dropped twice could only contribute 34 from 33 balls before he was run out because of a bad call from Samuels.

The first West Indian wicket to go down was Dwayne Smith (11 from 29 balls) caught and bowled by the diving R Ashwin. The opening stand consumed 7.5 overs to put up only 38 runs on the board!

After Gayle was dismissed, India strangled the West Indians completely with Amit Mishra taking two wickets in consecutive balls – Marlon Samuels (18 from 22 balls, stumped out to a turning leg break) and Dwayne Bravo (out for a duck, lbw to a googly).

Skipper Darren Sammy scored 11 from 7 balls before he was caught at long off in Jadeja’s bowling leaving Windies at 97 for 5 in the 18th over. West Indies finished decently with Ravindra Jadeja getting smoked for three sixes in the last over.

Toss and Teams: India has won the toss and opted to bowl first against the West Indies at Mirpur. The team for India is unchanged while the West Indies who are playing their first game have left out Ravi Rampaul. The defending champions have got left-arm pacer Krishmar Santokie in his place.

A high-scoring game is expected as the pitch played very well for the batsmen in the first game today between Pakistan and Australia.