If reports are to be believed, Indian skipper Virat Kohli is all set to skip the T20I series against Bangladesh.

If reports are to be believed, Indian skipper Virat Kohli is all set to skip the T20I series against Bangladesh. Kohli last took a break when India was in New Zealand at the start of the year. After playing the first three ODIs, he was given a break for the last two ODIs and the T20 series that followed. Kohli has been playing without a break since the ODIs against Australia in March.

India will host Bangladesh for a three-match T20 series starting November, followed by the two-match Test series, which begins on November 14. The selection for the T20I series is likely to take place on October 24. It is during this meeting that BCCI President-elect Sourav Ganguly is likely to speak to the selectors about MS Dhoni’s future. The former India skipper has been on a break since India’s World Cup 2019 exit in the semi-finals. 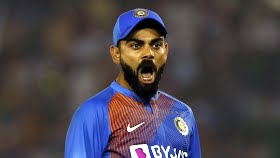 While Kohli looks set to skip the T20s, there is every possibility of him making a return for the two Tests considering every game matters in the World Test championship. After winning the second Test against South Africa at Pune, the Indian captain had also stated that “It’s been nice, but looking at the larger picture, the Test Championship, every game has even more value. We’re not going to take the foot off the gas in the third Test, we’re looking for a result again, and hopefully, make it 3-0.”

India is currently facing the Proteas in the third Test at MS Dhoni’s home ground Ranchi. After winning the toss and electing to bat first, India ended the day on 224 for 3 in 58 overs when bad light forced the end of the Opening Day. Rohit Sharma again stole the honors with an unbeaten 117, a knock featuring 14 fours and four sixes. Rohit featured in an unbeaten 185-run stand for the fourth wicket with Ajinkya Rahane, who was undefeated on 83 from 135 balls.

Earlier in the day, India got off to a shaky start as Kagiso Rabada dismissed Mayank Agarwal (10) and Cheteshwar Pujara (0) and Anrich Nortje trapped Virat Kohli (12) lbw. At the fall of Kohli’s wicket, India were 39 for 3 before Rohit and Rahane restored normalcy to proceedings.