Bangladesh A prepare to face Karnataka in 3-day game

After going down 1-2 in the one-dayers against India A and Bangladesh A are now gearing up to face Karnataka in a three-day match, which will begin in Mysore on Tuesday. Bangladesh A had a mixed time of it in the ODIs, losing the first and last game and, in between, taking the visitors in the second match. They will be hoping for a more full-fledged effort against Karnataka, more so since the hosts haven't announced a full-strength squad.

In the match, Karnataka would be led by R Vinay Kumar, who played a few ODIs for India some years back, but failed to impress. He will be expected to lead the attack for sure against Bangladesh A. Karnataka are weakened because they are without the services of some of their key players like Lokesh Rahul, Stuart Binny, Karun Nair and Manish Pandey. The four gentleman are part of India's 30-member preparatory squad for the South Africa series. However, Karnataka will have the services of Robin Uthappa, who is considered among the most dangerous batsmen in the team. 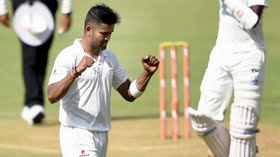 Uthappa has been on the fringes of selection recently and even made a comeback to the international side in the absence of MS Dhoni. Unfortunately, he could not make use of the opportunities. With his selection in the Karnataka team for this game, he gets another chance to make an impression. With Dhoni still commanding a place in the ODI and T20 squads, Uthappa will need to do incredibly well in case he wants to replace him as wicket-keeper batsman, or even if he wants a spot in the team as a specialist batsman.

Mayank Agarwal is also part of the Karnataka team for the Mysore clash. He had a reasonably good one-day series against Bangladesh A, and thus would be confident of carrying on with his good work in the three-day game as well. The other key batsmen in the squad include R Samarth and CM Gautam. If you look at their bowling attack, skipper Vinay Kumar will be supported by HS Sharath and David Mathias in the pace department. There is a definitely a weakness here as Abhimanyu Mithun and S Arvind, the two experienced players, have not been included in the team. The spin department includes Shreyas Gopal, J Suchith and Udit Patel.

Although Bangladesh A lost the one-dayers, they proved that they can compete. Nasir Hossain was sensational in the second match, and the visitors would be hoping for more such performances against Karnataka. Wicket-keeper Litton Das has been extremely consistent with the bat, but they would need more out of the likes of Anamul Haque, Rony Talukdar, Soumya Sarkar and Mominul Haque himself. In the bowling department, Bangladesh A would be looking forward to good efforts from Arafat Sunny, Rubel Hossain, Shafiul Islam, Taskin Ahmed, and Shuvagata Hom among others.