It took quite some time for the Aussies to wrap up the South African tail as Vernon Philander like Robin Peterson put up a partnership of 50 plus. Once again, it was the off spin of Nathan Lyon which provided the breakthrough when Vernon Philander (30 from 54 balls with 2 fours and a six) jumped down the track for an almighty hit but only to get caught brilliantly by a backward running Michael Hussey. 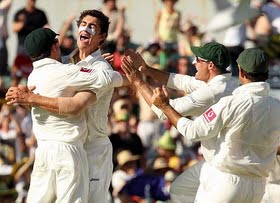 While Faf du Plessis remained rock solid at one end, Dale Steyn got out, dragging on a short ball from Johnson onto his stumps and Morne Morkel (17) was caught at mid on trying out a big shot off Lyon. Faf du Plessis remained unbeaten with a superb knock of 78 (from 142 balls with a dozen fours). SA innings lasted 74 overs with Lyon taking 3 for 41 and the two left arm quicks Starc and Johnson taking two wickets each.

Australia after that had a disastrous start losing Ed Cowan for a first ball duck in what was the third ball of the innings. Cowan was forced to edge his forward defence to the slips. In the 6th over, Vernon Philander got an lbw through the review system by hitting the pad of Shane Watson (10) with an inswinger dead infront of middle. With about 20 odd minutes or so to go for stumps, the Perth crowd were cheering loud anticipating the arrival of Ricky Ponting into the middle but only to end up booing as night watchman Nathan Lyon joined David Warner. Nevertheless, Lyon survived the final moments with 7* (from 22 balls) while Warner is on 12* (from 31 balls) and Australia at 33 for 2 in 11 overs.

Tea Report: Australia have put South Africa on the mat at 141 for 7 in 52 overs by Tea. The South Africans got one fighting partnership of 57 between Faf du Plessis and Robin Peterson which was broken by Nathan Lyon.

The start of the post lunch session saw the two big wickets of Hashim Amla and AB de Villiers go down in succession. Amla (11) was run out by a direct throw from Warner at covers when he was called for a quick single by the striker AB de Villiers in the 27th over. In just the next over, John Hastings got his maiden Test wicket when he lured AB de Villiers (4) into a false drive and got him edging a lovely full length outswinger to slips. Debutant left-hander Dean Elgar was out for a duck when he top edged a weak hook off Mitchell Johnson to the keeper down the legside to leave SA at 75 for 6.

SA then got past three figures thanks to the partnership between Faf du Plessis and Robin Peterson. That stand was broken by Lyon when he had Peterson (31) caught behind in an attempted square cut with the ball kicking up with lots of bounce. By Tea, SA have got Du Plessis on 39* along with Philander (4*).

Lunch Report: Mitchell Starc playing in his first Test of the Series made quite a difference taking two wickets before Lunch to leave South Africa on the backfoot at Perth. The Proteas are 63 for 3 in 25 overs in a hard fought morning session.

It took about an hour for the Aussies to get their first wicket which happened when Shane Watson got Graeme Smith (16) edging a forward defence to first slip with SA at 38 for 1 in the 12th over. The visitors were going along smoothly until the re-introduction of Mitchell Starc saw Alviro Petersen (30, 4x4s) get bowled playing all around a good length inswinger in the 23rd over. At the stroke of Lunch, Jacques Kallis got clean bowled by a late inswinger from Starc with the great man playing well outside the line of a length delivery in a straight drive.

At Lunch, SA have got Hashim Amla (11*) along with AB de Villiers (0*) at the crease. For the Aussies, apart from Starc, Mitchell Johnson bowled superbly but without any luck.

Toss and Teams: South Africa have won the toss and elected to bat first at the WACA in Perth in the third and Final Test Match. This is of course the Series Decider and both the teams have made quite a lot of changes to their line ups.

Australia have replaced the pace trio of Siddle, Hilfenhaus and Pattinson with Mitchell Johnson, Mitchell Starc and debutant John Hastings. Shane Watson returns back in the XI and making way for him is Rob Quiney. South Africa on the other hand have got in debutant Dean Elgar, Vernon Philander and Robin Peterson in the places of Jacques Rudolph, Rory Kleinveldt and Imran Tahir.