After a rather one sided match in the afternoon, we got to witness a high scoring thriller in Sharjah as the Delhi Capitals somehow managed to get over the line against the Kolkata Knight Riders by 18 runs courtesy some match defining death bowling by Nortje in the penultimate over.

Dinesh Karthik won the toss and put the opposition to bat considering the batting friendly conditions on offer and possible dew later in the match. DC got off to a flier as Shaw took on Cummins to put him under pressure. The premier Aussie pacer tried to pepper Shaw with a lot of short stuff but couldn’t get much out of the pitch, as a result of which he was on the receiving end. Dhawan too, got into the act and smoked Narine for two consecutive sixes in the fifth over but got out to Varun Chakravarthy the very next over.

At the end of powerplay, DC found themselves at 57-1, with skipper Shreyas Iyer joining hands with the settled Shaw. While Iyer took a few deliveries to get settled, Shaw kept on going for the big hits and put the young pacers Mavi and Nagarkoti under pressure. Russell bowled 2 overs for just 7 runs in his first spell and was the only silver lining in the otherwise disappointing bowling card for KKR. Shaw got to his fifty but got out soon to Nagarkoti as the Delhi batsmen were now trying to hit every ball out of the park. Pant joined the crease and smashed Mavi for two consecutive boundaries after taking a few balls to settle in. Iyer, who had just gotten to his fifty, was now facing Pat Cummins in the 17th over, and smoked him for two fours and a six in the same over. Russell came back to bowl the 18th and Pant hit him for 14 runs off 3 balls before getting out. Shreyas then stroked Chakravarthy in the 19th over for two sixes and a four as the Delhi skipper reached 88 of just 36 balls. He would have hoped for a maiden hundred but to no avail as he didn’t get to face a single ball in the final over as Delhi finished at 228-4. 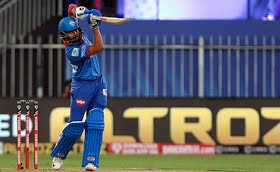 The DC bowlers began well as Narine and Gill came in pursuit of 229, with Rabada bowling an economical 4 run over and Nortje scalping Narine. Ashwin, in his comeback match, was at the receiving end of some beating from Nitish Rana as he stroked two sixes in the over. With the seamers going for runs, Iyer went to the experienced Mishra after the powerplay got over, and the veteran leg spinner repaid the faith shown in him. Not only did he bowl economically, but he also took the wicket of Gill and would have had Rana as well had he not dropped a simple return catch.

With KKR two down, Russell came in as the required rate was nearly 13 runs per over. With dre Russ just starting to open his arms, Iyer went to his trump card Rabada and we were set for a riveting contest. Russell started with a four and a six, but Rabada had the last laugh as Nortje took a blinder at third man.

Nitish Rana got to a well deserved half century as DK had now come to accompany him. Harshal Patel, who was playing his first match of the season, got both the batsmen out in consecutive balls as Delhi then seemed to be in firm control of the match.

At 122-6 with little over 6 overs remaining and more than 100 runs to get, not many would have given KKR much of a chance. But we were in for some drama as Kolkata made a comeback out of nowhere with Rahul Tripathi blasting 22 runs off Stoinis’s 5 balls. The very next over, we were in for some unreal scenes as Morgan took Rabada apart by smashing him for three consecutive sixes, as 23 came off Rabada’s final over. With a very gettable target of 31 from 12, KKR certainly would have fancied their chances. But Morgan got out to Norje as Hetmyer took a crucial catch, and only 5 runs came off the penultimate over. With 26 required off the final, it was all up to Tripathi to get KKR home. He started well by hitting a boundary the very first ball, but Stoinis bowled a fine yorker to get Tripathi out as KKR went on to lose the match by 18 runs.