Dew made a big difference: Sandeep Sharma after Hyderabad lose to Punjab

Hyderabad pacer Sandeep Sharma claimed that dew played a big role in his team's loss against Punjab on Monday. Batting first on a slow surface at Mohali, Hyderabad managed to post only 150, which Punjab chased down with six wickets in hand.

Punjab's win was built on a 114-run stand between KL Rahul and Mayank Agarwal who hit the fifties as the hosts got home with ease. "It had rained this morning, so the wicket had a bit of moisture, it was a bit sticky," Sandeep explained in the post-match press conference. 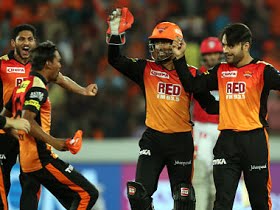 "Batting was tough because of that. We thought we would revise the total and batted accordingly. But in the end, dew was a big factor. There was a lot of dew and the entire ground was wet, the ball was getting wet. Due to this batting became easier in the second half than the first half," he added.

Earlier, David Warner scored another fifty for Hyderabad. However, this time his unbeaten 62 came off 70 balls. Around him, the middle-order again failed. It was thanks to Deepak Hooda's cameo off two fours and a six that Hyderabad gained some momentum.

Defending the batsmen, Sandeep explained that they need more chances. "Not many got the chance in the first few matches because they were batting most of the time and registered three hundred-run partnerships. Even if you observe today's game, the middle order didn't play a big role, Warner batted through. The middle order hasn't yet had a role to play."