Australia won the fifth and final ODI at Gros Islet in St Lucia by 30 runs to draw the 5-match Digicel ODI Series 2-2. The visitors survived a brutal counter attack from the West Indies Captain – Darren Sammy, who scored a career best of 84. Coming in at no.10, Sammy smashed 84 from 50 balls with 6 fours and 6 sixes to almost turn the match on its head.

West Indies chasing a target of 282 slipped to a sorry 118 for 7 in the 32nd over before Sammy joined fellow all-rounder Andre Russell to put up 101 runs in a little over 10 overs! Russell chipped in with an impressive 41 from 33 balls with 6 fours. West Indies folded to 251 all out in 47.2 overs to lose the contest by 30 runs. Opener Adrian Barath playing his second game of the series scored a slow 42 from 74 balls while the in-form Kieron Pollard made 33 from 40 balls with 2 fours and 2 sixes. For the visitors, Brett Lee bowled superbly for his 9-3-42-3. Clint McKay, Shane Watson and Xavier Doherty picked up a couple of wickets each. 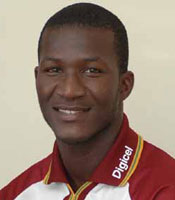 Earlier, Australia asked to bat first by Darren Sammy under overcast conditions put up 281 for 9. The opening pair of Skipper Shane Watson (66 from 89 balls with 4 fours and a six) and David Warner (69 from 61 balls with 10 fours and a six) laid a perfect foundation by putting 118 runs in 19.5 overs. No.3 Peter Forrest scored 53 from 68 balls with 5 fours. Australia apart from these fifties saw a batting collapse to end up with a much lesser total than anticipated. Andre Russell took 4 for 61 in 9 overs while Kemar Roach got 3 for 53 for the hosts.

Darren Sammy got the Man of the Match for his sensational knock while Kieron Pollard was named as the Player of the Series.