Lokesh Rahul notched up his second Test century in his short career while skipper Virat Kohli and under-pressure Rohit Sharma hit half-centuries as India recovered from a disastrous start to post a healthy 319 for 5 at stumps on day one at the P Sara Oval in Colombo. Although they would have been happier had they lost fewer wickets, they would take it considering the kind of start they got off to. Although, it was a first day pitch, India would be pleased with the way they batted against Rangana Herath, Rohit in particular, who was not worried to attack against both pace and spin. It was the kind of batting effort India were desperately seeking after the embarrassment at Galle

Rahul's century meant that the competition for the openers slot would remain healthy. Rahul had missed out in both innings of the first Test even as Shikhar Dhawan registered his second century in as many Tests. With Murali Vijay recovering from his injury, Rahul seemed set to sit out of the second Test. However, Dhawan's bruised hand meant Rahul kept his spot. And, as it turned out, Rahul went on to complete his second Test hundred while Vijay fell without scoring in the first over. It would be an interesting scenario to pick the openers when all three are fit. 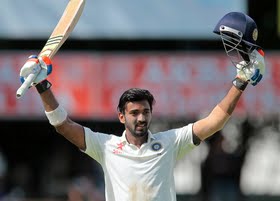 Coming back to the match, India got off to a disastrous start after winning the toss and deciding to bat first. India went into the game with three changes -- Vijay coming in for Dhawan, Stuart Binny for Harbhajan Singh and Umesh Yadav for Varun Aaron. How the last two changes affect India, we will only know when they come out to bowl. But, the comeback of Vijay could not aid India's cause in the first innings. There were high hopes from him, but he was back without scoring in the very first over, trapped in front by an in-coming delivery from Dhammika Prasad. Ajinkya Rahane was promoted to number three, but the move did not work. He played away from the body to Prasad, and was caught in the slips for 4.

At 12 for 2, Rahul was joined at the crease by skipper Virat Kohli, with India looking in big trouble. Prasad continued to bowl tightly, rarely coming up with a bad ball. At the other end, skipper Angelo Mathews took the new ball, and also kept India under pressure. It was only when the ball was pitched up that they found some leeway. The introduction of Dushmanta Chameera gave India some actual relief. The lanky fast bowler, playing in place of the injured Nuwan Pradeep, delivered some loose balls, and the Indians were underway. Rahul used his feet well against the spinners, while Kohli drove with ease as the fightback began.

The Indian pair did not hesitate in being aggressive against Rangana Herath as well, until one such shot got the better of the Indian captain. On 78, and looking set for yet another Test hundred, in a career that is still taking wings, Kohli went back and tried to late cut Herath, only for Mathews to take a brilliant one handed catch at slip. The partnership was worth 164, and had put India into a comfortable position. A jittery Rahul went to tea at 98, but completed hid century soon after. He though fell for 108, playing a poor hook shot to give a catch behind the wickets. Binny also went cheaply, Rohit Sharma's demotion though worked in India's favour.