SL-NZ Only T20I abandoned due to intermittent showers

The Only T20I between Sri Lanka and New Zealand at Pallekele was abandoned due to intermittent showers. It was an on and off evening at Pallekele with just the 16 overs of action taking place.

The Only T20I between Sri Lanka and New Zealand at Pallekele was abandoned due to intermittent showers. It was an on and off evening at Pallekele with just the 16 overs of action taking place.

The match which got underway 45 minutes late started off as a 20-over contest in which the Kiwis struggled at 24 for 5 in 8.4 overs on a juicy pitch when rain halted play. After sometime, play resumed with the match cut short to 14 overs. New Zealand finished at 74 for 7 thanks to Tim Southee’s cameo of 21* from 10 balls with 4 fours. 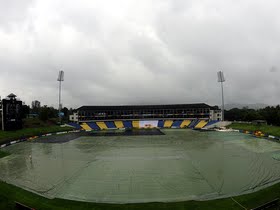 The damage was well done by the Lankan pacers with Skipper Angelo Mathews coming up with an opening spell of 3-1-4-0 and Nuwan Kulasekara taking 2 for 13 in 3 overs. Thisara Perera and offie Akila Danajaya took two wickets each.

Sri Lanka needing 72 to win from 14 overs as per the D/L Method were 6 for no loss in 2 overs when the rain settled down to prevent any further action.

Toss and Teams: Sri Lanka under a new Skipper in Angelo Mathews have won the toss and elected to bowl first in the Only T20I against New Zealand at Pallekele. The match started 45 minutes late because of rain early on. Despite that no overs have been reduced in the contest.

Rain Update: The Only T20I between Sri Lanka and New Zealand at Pallekele is likely to be washed out because of heavy rain. The entire ground is under covers while the stadium by and large looks empty! The only people seen in the stadium are the players of two teams, the TV Broadcasters and perhaps the security people. The match could be abandoned without a single ball bowled if the rain continues to lash out for an hour or so.