WI vs ENG 3rd Test Result, Scores: At the start of day 3 it was all but clear that, one way or the other, a result would be in the offing. Again, there were twists and turns as England’s lower order collapsed for the second time in the match, leaving West Indies with a gettable target of 192

At the start of day 3 it was all but clear that, one way or the other, a result would be in the offing. Again, there were twists and turns as England’s lower order collapsed for the second time in the match, leaving West Indies with a gettable target of 192. However, the hosts themselves stumbled in the chase as they collapsed to 80 for 4. But, Darren Bravo and Jermaine Blackwood ensured that there were no further changes in fortunes with a match-defining 108-run partnership for the fifth wicket as West Indies got home easily in the end. 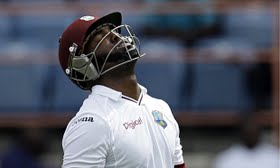 What stood out about the Bravo-Blackwood alliance was the maturity with which they dealt with the crisis situation. Both are stroke players, known for their flair, but they reined themselves in nicely, and only opened up when the target became a comfortable proposition. Bravo anchored the innings with his 82 off 148 balls. He all but took the team to the doorsteps of victory. It was a sort of an anti-climax when he perished to a catch at mid-off with four runs to get. Blackwood though remained unbeaten and completed a memorable match.

Bravo and Blackwood came together at the crease with West Indies having lost Shivnarine Chanderpaul early yet again. The veteran dragged one from James Anderson onto the stumps for a duck. It was a forgettable series for the legend, and his days as an international cricketer finally seem numbered. Things could have gotten worse for West Indies as Blackwood had a wild swish at Joe Root, only to miss the ball completely, but Jos Buttler also made a mess of it behind the stumps. After the lost stumping chance, Blackwood grew in confidence, and the doors of opportunity were shut on England.

Bravo, who has developed a habit of throwing his wicket away in the 30s and 40s, showed exemplary patience when England were on top. He played out a number of maidens, and even as the pressure grew when Marlon Samuels departed, Bravo hung on. His rare moment of aggression came when he hit Moeen Ali down the ground for sixes on a couple of occasions, but this was when the target was within sights. The result was a huge relief for West Indies especially in the wake of their recent disasters, including the abandoned tour of India.

Earlier, West Indies’ bowlers shone again as England were cleaned up for 123 on the third morning. Resuming at 39 for 5, Gary Ballance and Ben Stokes batted without much trouble early on, but once Ballance was taken out by Veerasammy Permaul, the Windies got back on top. Jason Holder trapped Chris Jordan lbw, and the cleaned up Stuart Broad first ball to leave England tottering at 9 for 98. Buttler struck a few hefty blows, but Taylor had Anderson lbw to finish off England. 192 seemed liked a daunting target midway through the chase, but Bravo and Blackwood turned it into a cakewalk.