Rohit Sharma slammed 127 from 149 balls on Day four of the first Test against South Africa at Visakhapatnam to become the first batsman to hit centuries in each innings on debut as an opener. After an imperious 176 in the first innings, Rohit made a breezy century in the second before being stumped off Keshav Maharaj.

During the course of the innings, Rohit broke the record for most sixes in a Test match by an Indian batsman. He hit a total of 13 in the match -- 6 in the first and 7 in the second. The earlier record was in the name of Navjot Singh Sidhu, who hit eight sixes in a Test against Sri Lanka at Lucknow in 1994. 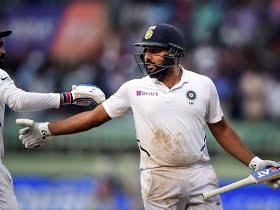 Rohit created another Indian record during the second innings when he displaced Rahul Dravid as the batsman with most consecutive scores of 50-plus in India. Dravid has six successive scores of 50 or home at home in the period between 1997 and 1998. Rohit had earlier featured in a 317-run opening stand with Mayank Agarwal (215) in the first innings as India posted 502 for 7 declared.

After bowling out South Africa for 431 and gaining a first-innings lead of 71 thanks to Ravichandran Ashwin’s seven-for, India lost first-innings top scorer Agarwal cheaply, for 7, in the second innings as he edged Maharaj to Faf du Plessis at first slip.

Cheteshwar Pujara struggled a bit early on and was even dropped by Quinton de Kock when he was only on eight. However, once he found his groove, he came into his own and went on to notch up his 21st half-century.

Pujara featured in a 169-run stand for the second wicket as India grew its lead. He looked set for a hundred when he was trapped lbw by Vernon Philander for 81. Ravindra Jadeja (40), Virat Kohli (31 not out) and Ajinkya Rahane (27 not out) all scored quickly as India declared at 324 for 4, and set South Africa a tough target of 395.