1st ODI review: India were just too strong for Zimbabwe

In spite of resting a few big names, India still went into the series against Zimbabwe as favourites. And, if the first ODI at Harare is anything to go by, the Zimbabweans will be in for a tough time for the rest of the games as well.

In spite of resting a few big names, India still went into the series against Zimbabwe as favourites. And, if the first ODI at Harare is anything to go by, the Zimbabweans will be in for a tough time for the rest of the games as well. India came up with an excellent all-round effort to clinch the first ODI by nine wickets, not giving an inch of space for Zimbabwe to relax either with the bat or ball. It was the kind of performance which reiterated the huge gulf between the two sides. India should be extremely pleased with the effort. And, while Zimbabwe were always fighting a losing battle, they would ideally have liked to put up a much more competent showing.

As things turned out, India were just too good for the hosts on the day. In spite of having multiple debutants, they still dominated the proceedings. One of them, even went on to create history. Till a couple of years back, Lokesh Rahul would not have imagined in his wildest dream that he would become the first Indian to hit a century on ODI debut. After all, he had been selected in the Indian team as a Test specialist. But, full credit for the man from Bangalore for turning things round. From a horrible Test debut to a hundred on one-day debut, he indeed has come a long way. Even if one considers the underwhelming nature of the opposition, a hundred on debut is still a noteworthy feat, and Rahul must get full credit for the same.

Along with Rahul, Ambati Rayudu came up with a well compiled half-century. For no fault of his, Rayudu has constantly been in and out of the Indian team over the years. Thus, it was understandable that he took his own sweet time as Rahul went on his merry ways. Although playing second fiddle, Rayudu will be pleased that he managed to come up with a decent score. At the same time, he should be expected to score at a better pace in the coming games, now that he has got some confidence back. The worrying aspect of Rayudu's career so far has been that he has played most of his matches against Zimbabwe. The think-tank must try to see to it that he gets to play more competitive cricket.

There were plenty of positives for India in the bowling as well. A lot of hopes were placed on upcoming talent Jasprit Bumrah in the run-up to the series. And, he did not disappoint, coming up with a brilliant bowling effort to finish with four wickets. The Zimbabweans found him pretty much unplayable, and Bumrah took full advantage of the same. If not for Rahul's brilliance, he was a sure shot candidate for man of the match. The other two pacers in the match, Dhawal Kulkarni and Barinder Sran also had a good game picking up a couple of wickets each. In the spin department, Axar Patel and Yuzvendra Chahal were successful in keeping things tight, thus maintaining the pressure. 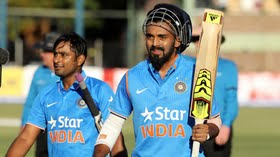 As mentioned earlier, Zimbabwe will be disappointed with the lack of fight they showed, especially with the bat. Elton Chigumbura was the only one who showed some spunk. But, they needed more out of the other talented batsmen. Chamu Chibhabha, Hamilton Masakadza, Craig Ervine and Sikandar Raza all got into double figures but failed to carry on. At least a couple of them needed to come up with much better efforts, especially considering that most of them are experienced. But, that wasn't too be. The bowlers really did not have much to do. Still, their performance should be seen as too insipid for the team's liking.