As mentioned in the preview to the Christchurch Test, neither team really went in as favourites despite tasting contrasting fortunes in recent times. New Zealand were expected to compete in spite of being thrashed in India

As mentioned in the preview to the Christchurch Test, neither team really went in as favourites despite tasting contrasting fortunes in recent times. New Zealand were expected to compete in spite of being thrashed in India, as the conditions at home were hugely in their favour. At the same time, Pakistan would have been confident of doing well as they had been highly impressive in England. But, the Kiwis proved why they are a highly dangerous opponent in their home territory, with a stupendous all-round effort. As for Pakistan, their batsmen were clearly found out under the conditions.

While there were many impressive aspects to New Zealand's crushing win, the standout factor was definitely the memorable performance of the two debutants. Colin de Grandhomme literally blew Pakistan's hopes away with his six-four in the first-innings. It was a remarkable effort from the debutant, and Pakistan could do little to recover after being cleaned up for 133 in the first innings. The other debutant for New Zealand, Jeet Raval, also played a key role. Coming in for the dumped Martin Guptill, Raval's first-innings fifty ensured New Zealand maintained the upper hand on a tough batting surface. He held his nerve in a tricky chase as well.

While the debutants shone brightly for New Zealand, there were good support acts from some of the experienced players as well. Tim Southee and Trent Boult played the good back-up acts in the first innings. But, in the second essay, when de Grandhomme could not repeat his heroics, they rose to the occasion, running through the Pakistan batting line-up. Neil Wagner also made his presence felt, as the trio ensured the debutant's first-innings heroics did not go in vain. Skipper Kane Williamson also played his part, chipping in with a swift fifty to take the side home to victory without much trouble. The one big worry for New Zealand remains, as Ross Taylor's poor run of scores continued.

For Pakistan, the match was pretty much lost on the first day. Yes, the conditions were tough for batting as the ball moved around. But then, what else do you expect in New Zealand in the first two days. Pakistan's batsmen kicked themselves in the foot as a number of their batsmen played airy-fairy shots to give their wickets away. Not a single batsman got a fifty across the two innings, and that hurt Pakistan very badly. They had high hopes from their experienced batsmen, but Azhar Ali, skipper Misbah-ul-Haq and Younis Khan all failed to get going, and Asad Shafiq too failed. Sohail Khan's 40 was Pakistan's highest score in the Test, that says a lot. 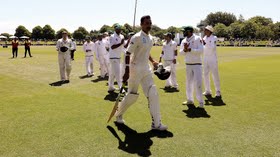 Pakistan's bowlers, in comparison, did a pretty good job. Mohammad Asif, Sohail Khan and Rahat Ali combined brilliantly to keep New Zealand down to 200. Had Pakistan batted better in their second essay, they would definitely have been in with a chance of coming back into the game. But, their batsmen were just not good enough to stand up to the task. Instead they faltered yet again to ease New Zealand's victory path. The significant aspect of Pakistan's failure was that leggie Yasir Shah went wicketless, for the first time in his career. That pretty much sealed Pakistan's fate, and any hopes they had off pulling off an upset.